As the earth-friendly competition, RecycleMania, was winding down (it officially ended on April 2nd), UR students held one last BIG event to stir up some awareness on campus. This annual event takes the unusual form of a mountain that is made up of all of the trash generated from 3 of the busiest buildings on campus and is known fondly as “Mt. Trashmore”. During the course of the whole day (or at least from the hours of 9 am until 5 pm) students hulled out all the trash that was collected from inside of Rush Rhees Library, Frederick Douglas, and Wilson Commons and then placed it into a big heap in front of Wilson Commons for all to see. By the evening, the pile was an enormous visual reminder to all passersby of how much waste is produced on a daily basis and what it is composed of. Mt. Trashmore emphasizes the importance of recycling, and even more significantly, that we should all reduce our waste output. It all lines up with the message of RecycleMania, which not only focuses on recycling, but those other 2 R’s (reducing and reusing) as well. 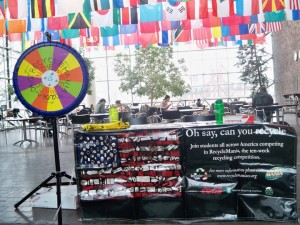 To engage students and other passers-by in further discussion and understanding of this event, and also to allow people a chance to warm up from the cold temperatures outside, there was an informational table held inside of Wilson Commons. Just for fun, the trivia wheel game and prizes went along with it.  The wheel game was also brought out throughout the entire ten weeks of the RecycleMania competition by student group Grassroots who were aiming to spread awareness.

You can see more pictures of Mt. Trashmore on the UR Sustainable Facebook page. While you are there, you can also check out the pictures from the other UR RecycleMania happenings including the Water Week event, the tour of the Monroe County Recycling Center, and some shots of the dedicated students who work hard to spread awareness and fun in the spirit of the friendly competition.

Also, stay tuned as the final results for RecycleMania will be posted this Friday, April 15th.  But always keep in mind that even though the competition is over, the voyage to reduce, reuse, and recycle continues on!