A raingarden was recently installed at the Witmer House where President Sarah Mangelsdorf and Professor Karl Rosengren reside, thanks to a partnership between a hydrology course, University leadership, and the grounds department. The project initially launched last fall and was delayed due to the pandemic. But in late August students and staff could be seen planting the shrubs in the long-awaited raingarden. Comprised of native plant species, the garden will serve to capture rainwater runoff from the president’s house in an environmentally friendly manner. 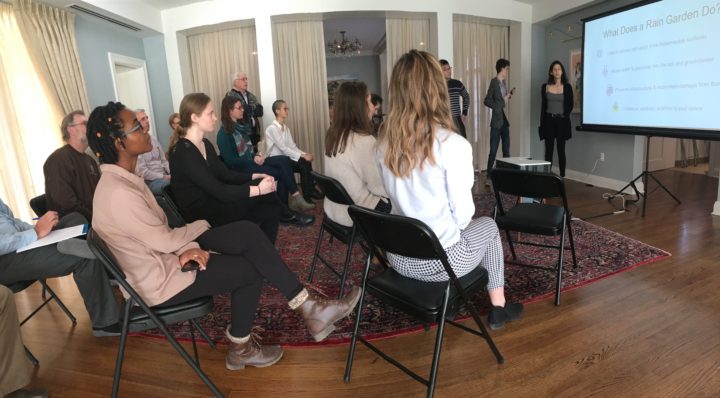 Last fall, students from EES 213 Hydrology & Water Resources learned about the benefits of raingardens. Raingardens are built as depressions designed to collect rainwater runoff from buildings. As the garden is watered by the runoff, mulch and plants absorb water and filter pollutants before the water enters the storm drainage system. Not only are raingardens eco-friendly but they serve as a cost-effective solution to runoff as well. The Witmer house was identified as having a problem area where a drain flooded water into the lawn and damaged the vegetation. The students first met with Grounds Manager John McIntyre last October to assess what it would take to address this issue by implementing a rain garden in this location. McIntyre helped to identify the rain water source, develop material costs, and answer questions. Students developed their proposals and in December presented them to President Mangelsdorf, Professor Rosengren, grounds staff and other professors. 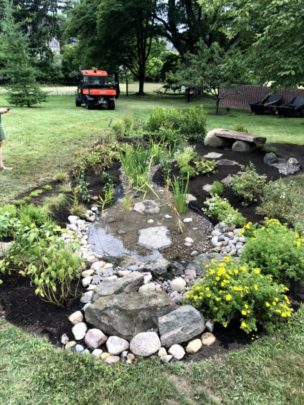 President Mangelsdorf and Professor Rosengren were eager to support the project and even personally funded its implementation in full by donation to the campus beautification fund. Professor Karen Berger who led the course says, “We were grateful for the enthusiastic support from President Mangelsdorf and Professor Rosengren, which extended to helping with the digging and planting in August. The spot now serves as an accessible destination for students to visit and see a rain garden in action.”

After having to distance from campus in the spring due to the pandemic, those involved were eager to resume the project quickly in August. The design received approval on August 13 and the very next day a bench and plants were selected and purchased from Broccolo Garden Center. The installation started on August 19 and was completed on the 21st, with all hands on deck. Professor Berger calls the project, “a prime example of the benefits of collaboration between the operational and academic sides of the University.” The hope is the garden will serve as a real life example and living lab students can visit and learn from for many years to come.