The Central Utilities plant has continually upgraded its systems to provide electricity and heat throughout the River Campus and Medical Center. Recent data shows that improvements made, such as the Fraternity Quad conversion from steam to hot water, provide a safer, more cost-effective and environmentally efficient alternative to the existing steam system.

Improvements have been ongoing for many years. The central plant was originally designed in 1924 to provide steam to heat buildings through underground piping. When steam is consumed in the buildings, it condenses into liquid water, then is returned to the central plant to be reused. The system underwent a milestone upgrade in 2005 to improve efficiency, reliability, expand capacity, and add new services including the cogeneration system.

The cogeneration system, known as Cogen (pictured below), utilizes steam to drive a turbine that generates about ⅓ of the annual electricity used by the River Campus and Medical Center. The electricity produced reduces the amount of purchased energy from outside sources. As a bonus, approximately 80% of the hot water distributed to the River Campus and Medical Center is produced using captured waste heat from the electrical generation process. The system earned its name from its ability to simultaneously generate both electricity and usable heat. 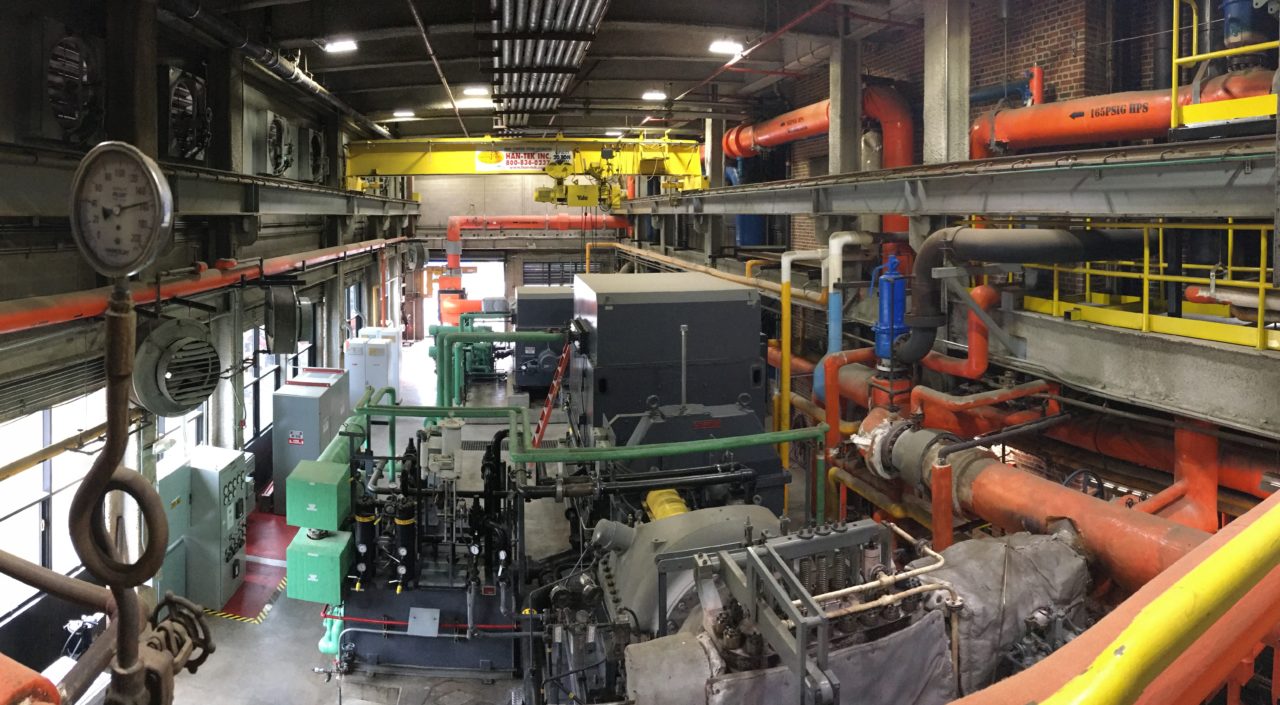 Converting buildings to the new hot water system avoids repairing old steam piping which is failing and costly to address. The new system is more efficient and generally easier to maintain. For example, it utilizes a new technology which helps Central Utilities staff identify leaks in the hot water system so that they can be addressed early on.

In 2015, the Fraternity Quad’s 85-year-old steam system had reached its end-of-life, so the buildings were connected to the central plant’s Cogen hot water system. The timing of the project was prioritized due to a steam piping failure which created a dangerous sinkhole. Additionally, the old piping diverted condensate to the sewers instead of returning it to the central plant which wasted energy, water, and required additional conditioning treatment. The installation of the co-gen system in the Fraternity Quad saved the University an initial $1-2 million dollars and reduced operational expenses. Adjusting for weather differences, there was an average 34% reduction in energy used to heat the buildings. Below are graphs that detail the significant decrease in heat usage and electricity purchased. 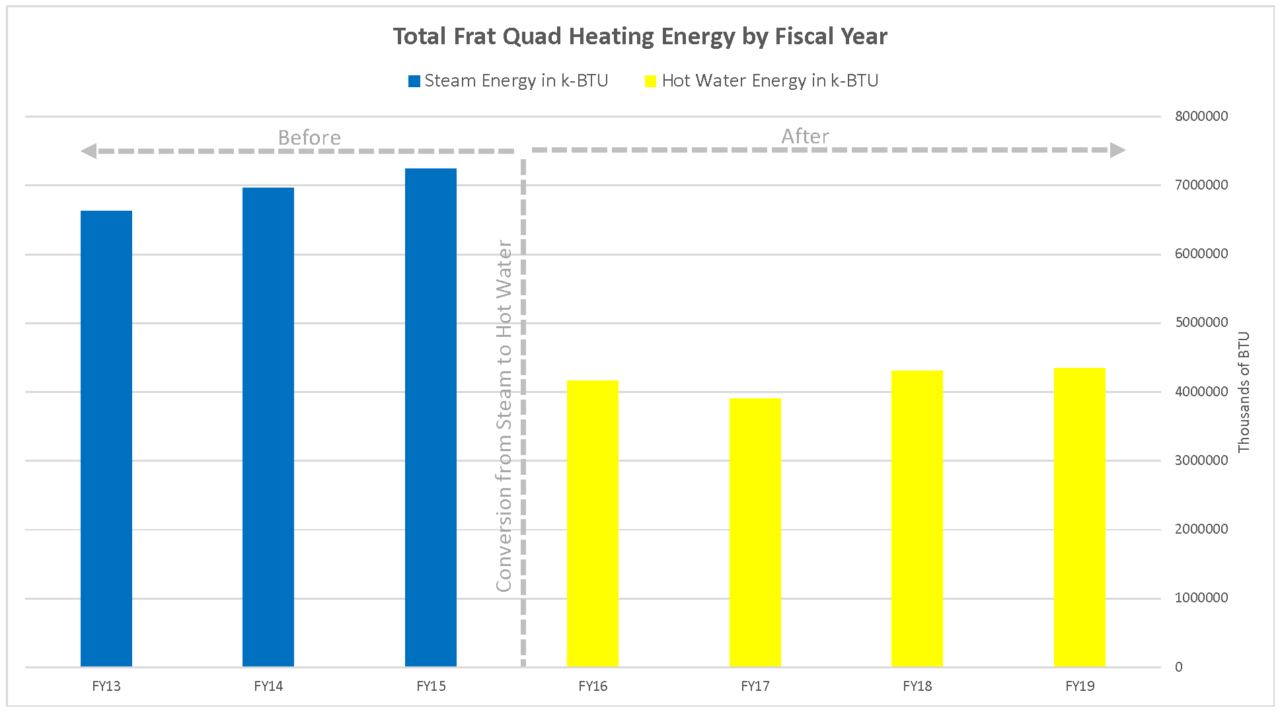 Graph 1: The blue bars represent the total steam energy used to heat the Fraternity Quad before the conversion while the yellow bars indicate the total hot water energy used with the new system in place. 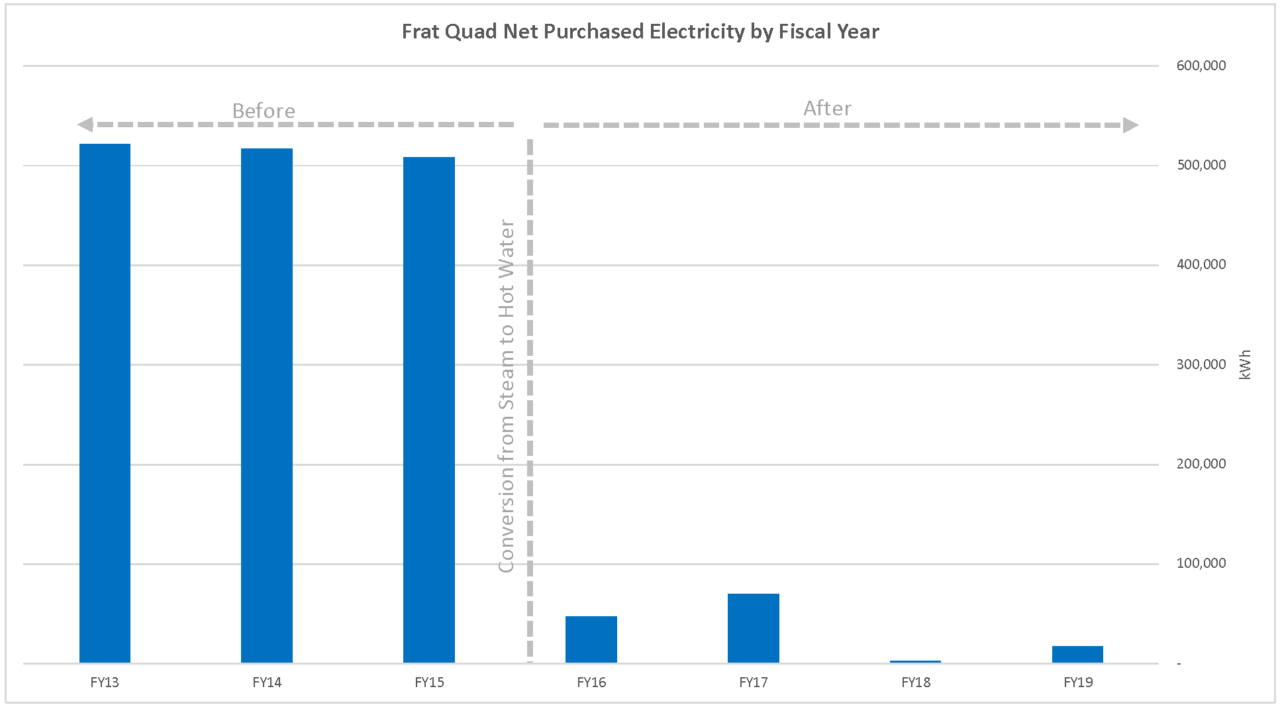 Cogen systems were also installed in Spurrier Hall, Fauver Stadium, Frederick Douglass Commons, New York State Optics, Susan B. Anthony, and various areas in the Medical Center. Energy Engineer Tim Vann states, “The Frat Quad conversion to co-generation is just one example of how Central Utilities is continually evolving in order to better serve the needs of the university while simultaneously reducing our dependence on natural resources. These win-win scenarios are the best types of improvements: the university’s capital and operational costs were both reduced, the building owners have a smaller energy bill and the environment is able to breathe a little easier. Remember: Cogen is your friend!”