I found this interesting image the other day: 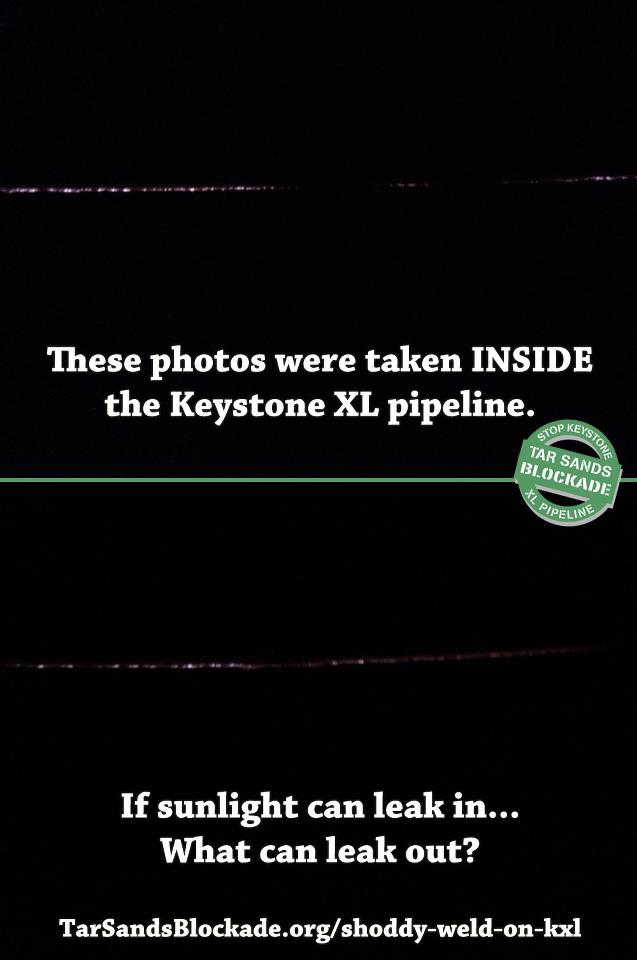 According to the website where this image was found, the two photos were taken by protesters who had confined themselves within the Keystone XL Pipeline and were shocked by what they found at dawn. This compromised area of pipe is only a few yards away from a Winona, TX home and swingset.

The Keystone XL pipeline intends to transport sands/diluted bitumen from tar sands in Alberta, Canada to refining fields in Oklahoma and Texas. Currently only Phase I (Alberta to Illinois) and Phase II (Nebraska to Oklahoma) have been completed. In that time, the pipeline has leaked at least 30 times, if not more. In fact the pipeline was given a Corrective Action Order by the United States Department of Transportation – and it is the youngest to receive such an order by 20 years. As of December 2012, two whistleblowers have stepped forward concerning negligence and problems over the corporation’s internal inspection and auditing process.

I find the negligence evidenced by the shoddy construction of this section of the pipeline shocking, though I supposed I shouldn’t. After highly publicized and destructive environmental disasters like Love Canal and other Superfund sites, which often involve leaking of toxic materials, one would think that an enormous and expensive pipeline would take more care in preventing its cargo from spreading during transport. We can only debate where the responsibility lies, TransCanada or our own government. Overall, in my opinion considering how corrosive and toxic the material it transports, it is only a matter of time before there is a huge leak from Keystone XL.