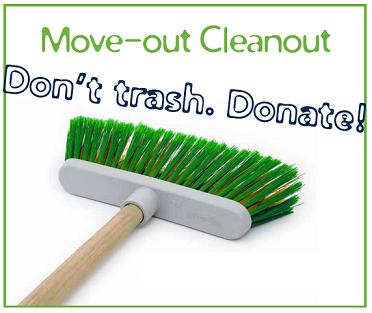 On the last day of finals, most students at the University of Rochester walk out of their examination hall relieved, pumping their fists at the sky while reveling in their newfound freedom. However, this feeling soon dissipates upon arriving back to their dorm room, where they are faced with the daunting challenge of having to pack up all of their belongings to move out for the summer. During this process, many are often incredulous that their bags, suitcases, and vehicles all of a sudden seem to hold such little space. As a result, a lot of school and room supplies, clothing, unused food, furniture, and electronic equipment gets left by the wayside at the end of the academic year.

Prior to the Move-out Cleanout and Dump & Run, these items would find their way to the dumpster and be hauled to landfills. There is good reason to be alarmed by this. In the U.S. alone, around 33 million tons of food, 11 million tons of clothing, and over a million tons of electronic equipment ends up going to landfills each year. This is significant as around 15% of food waste in the US comes from unopened containers that have not expired, and 95% of clothing wasted can either be directly reused, or reprocessed for industrial use!

Bearing this in mind, Amy Kadrie, recycling coordinator at the University of Rochester, began the tradition of the Move-out Cleanout in 2009 to collect shoes, clothing, food, and electronic equipment to be reused and recycled. This year, a record-high of 10,657 pounds of clothing was collected from across campus between May 1st and May 22nd. In order to have some good clean fun (no pun intended), collection bins were individually monitored to see which campus housing locations would bring in the most goods.

The Residence Quad contributed the most among all areas, totaling a whopping 3,500 pounds of clothing collected in the two containers placed on either side of the area. Riverview Apartments was in second place with 2,500 pounds followed by Susan B. Anthony contributing 1,880 pounds. With Southside Living Area collecting 1,050 pounds and Towers collecting 1,025 pounds, the two areas were neck and neck!

In addition to this, approximately 910 pounds of unopened food was collected as a result of the cleanout and the 2,350 pounds of electronic equipment recycled well surpassed last year’s total of 1,403 pounds! Further, a substantial amount of furniture, room supplies, and school supplies were salvaged for reuse during Dump & Run, organized by the Student Association club Grassroots.

All clothing collected was donated to the global organization Planet Aid. In 2010, Planet Aid collected 95 million pounds of used clothing and shoes, and provided $12 million in support of those in lesser-developed nations. Food collected went to support local organization Open Door Mission, which provides food and emergency housing to homeless and low-income men, women, an children in the Rochester community.

Finally, electronic equipment was recycled with the aid of Sunnking, who safely recycles all of the University’s unwanted electronics. Per our contract with Sunnking, all hard drives are shredded to completely destroy any confidential information. The shredded materials are recycled domestically for commodity recovery. Following the 3 R’s, Sunnking will first refurbish/resell any re-useable equipment that they can. The remaining equipment is dismantled and the parts are sorted into various metal categories, which are then sold on the recycling commodity market.

Thanks to everyone who contributed to the Move-out Cleanout, Dump & Run, or other collections during move-out! A large amount of waste was diverted from landfills, supporting not only our environment, but both the local and global community as well.