The Case for Nuclear Power

Today, the term clean energy is almost synonymous with solar and wind energy. While these renewable energy sources don’t emit greenhouse gas, they have their own shortcomings, the main ones being their fluctuation and low power density. On one hand, sunshine and wind don’t match consumer demand; on the other, it requires a large footprint to generate sufficient energy to power an entire city. While watching a TEDx Talk on clean energy, I was surprised to hear that nuclear power was not only a clean and efficient energy source, but also a safe one. Despite its unpopular reputation due to its destructive potential, nuclear power is ironically one of the safest sources of electrical energy statistically.

Because of the potential of misuse by ill-intentioned leaders, we tend to overestimate the danger of nuclear power plants. While nuclear reactor accidents do happen, they are very rare. In a report published on the International Atomic Energy Agency website, Herbert Inhaber explains that a holistic risk assessment would make nuclear energy the second safest source of energy. As shown in figure 1, the number of deaths per unit energy output (one megawatt-year) is much higher for wind and solar is much higher compared to nuclear. This is a case of sharks versus cows. While sharks are reputed for being deadly, cow-related human deaths are twice as much as deaths from sharks. 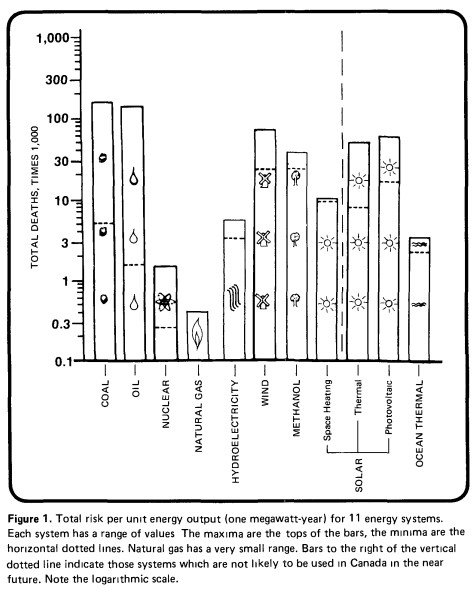 Safety isn’t the only advantage of nuclear power plants. Unlike solar and wind energy, nuclear energy does not fluctuate and can easily exceed consumer demand. In nuclear power plants, nuclear fission generates heat to turn water into steam, which in turn spins large turbines to generate electricity. The power output from this process is enormous, all with a small land footprint.

The whole point of clean, renewable energy is to generate electricity without impacting the environment negatively in the process. Although solar panels and wind turbines don’t have byproducts, they will inevitably pollute the environment (albeit minimally) at the end of their life cycle. In addition, their large land footprint takes away space that could have been used for agriculture. In contrast, nuclear energy produces enormous power with a fraction of the land. While nuclear plants produce radioactive waste, it is negligible—though it requires precautious storage.

Over the past years, nuclear power has been on the decline, with governments increasingly ordering the teardown of nuclear electricity plants. Despite its benefits, getting everyone on board with nuclear power proves difficult. The technology is threatening to most and very expensive to implement. Hopefully the sentiment towards nuclear power changes given its potential to solve our energy problem.