On cold winter days, clouds of steam can be seen drifting from the Central Utilities Cogen Plant (Cogen), located between the River Campus and the Medical Center Campus. But what is Cogen? And why has the University chosen this more efficient option to power its buildings? The evolution from the initial coal-fired central heating plant built in 1903 to the current Cogen system tells a story of how the University has consistently advanced its power systems to be more environmentally and economically efficient. This can be seen as one of the most significant efforts along the University’s path in sustainability.

University President Rush Rhees was a pioneer believing in the vision of centralized heating and electrical generation. He first built a coal-fired central steam heating plant on the original campus east of downtown Rochester. In the mid-1920s, a second coal-fired system was installed in what is currently the Central Utilities Plant. Rhees was first to light the fires in the original boilers. Upgrades made at this location paralleled technological advancements, as the system’s energy source changed from coal to natural gas and distillate fuel oil. Currently, the system is transitioning from steam and hot water delivery.

The current cogeneration system, known as Cogen, is a notable milestone for the University as it is able to simultaneously generate both electricity and usable heat. More specifically, the plant’s current cogeneration system produces electricity from steam while reclaiming the excess thermal energy from the process to heat many of the campus buildings.  What began strictly as a heating system has evolved to produce a significant portion of the campus’s electrical requirements and is optimized to meet the needs of the University as it continues to grow.

Below is a brief timeline that outlines the steps taken by the University to evolve from a coal fired plant to the current Cogen plant:

Archived photos of the heating system construction can be found here. The photo above, taken March 9, 1967, is an electrical vault being constructed near the current central plant.

So why is the Cogen plant a much more efficient option? Cogeneration, also known as Combined Heat and Power (CHP), is the process of generating electricity with a heat source (in this case steam) and recovering the unutilized heat from the electrical generation (in this case hot water) and converting that into usable energy to heat buildings.  Electrical generation is inherently inefficient.  A typical industrial turbine generator converts about 1/3 of the energy from the fuel source into electricity and the remaining 2/3 of the source energy is rejected to the atmosphere.  A cogeneration system captures most of the rejected energy and does something useful with it.  This can dramatically increase the overall (combined) efficiency of the process, typically in the 60-80% range. 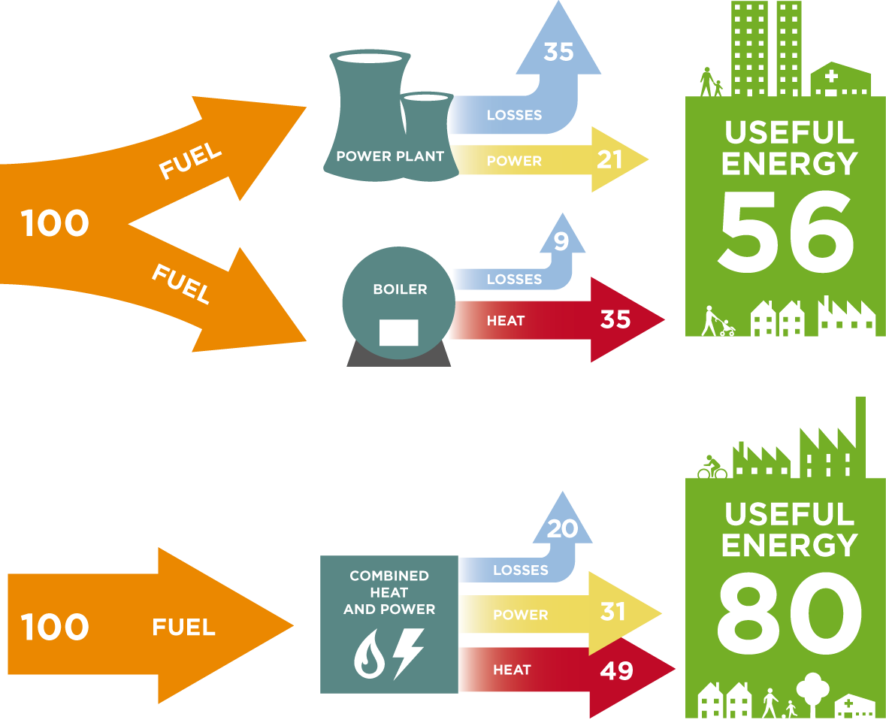 Cogeneration has many benefits including:

The Cogen system currently generates about 1/3 of the electricity and about 1/2 of the thermal heating used by the River Campus and Medical Center.  As we transition more buildings from steam heating to hot water heating those numbers will continue to increase.

2 Replies to “The History of University’s Power Plant”