What was once a flat rooftop of the Goergen Athletic Center is now lined with rows of solar panels that will provide enough energy to offset the near net-zero office building soon to be constructed on the south side of Hutchinson Hall.

The New York State Energy Research and Development Authority (NYSERDA) awarded the University a $1 million grant in October of last year as part of NYSERDA’s REV Campus Challenge which acknowledges New York universities for their dedication to clean energy. The University’s Center for Energy and Environment (CEE) is overseeing this project that will unite the Rochester community.

The collected power from the panel array that covers the roof of the Georgen Courts will contribute to the collective energy system where it can be dispersed throughout the University. The 336-kilowatt system was built on top of the Goergen Athletic Center since it has a larger size than the new office building, allowing more solar energy to be captured. However, the new construction will still be considered near net zero because the solar panels will provide the equivalent amount of energy the new building will be using. In other words, the new office will still be energized by renewable energy sources.

New York State has a new goal of supplying half of the state’s electricity from renewable and eventually reduce greenhouse emissions to 40 percent below 1990 levels by 2030. Although the solar project is not operating yet, the system will be able to annually generate 390 megawatt hours in correspondence with the Rochester climate. This is enough clean energy production to offset about 78 tons of CO2 emissions. New York has one of the cleanest energy grids in the nation because of its hydro and nuclear power systems. 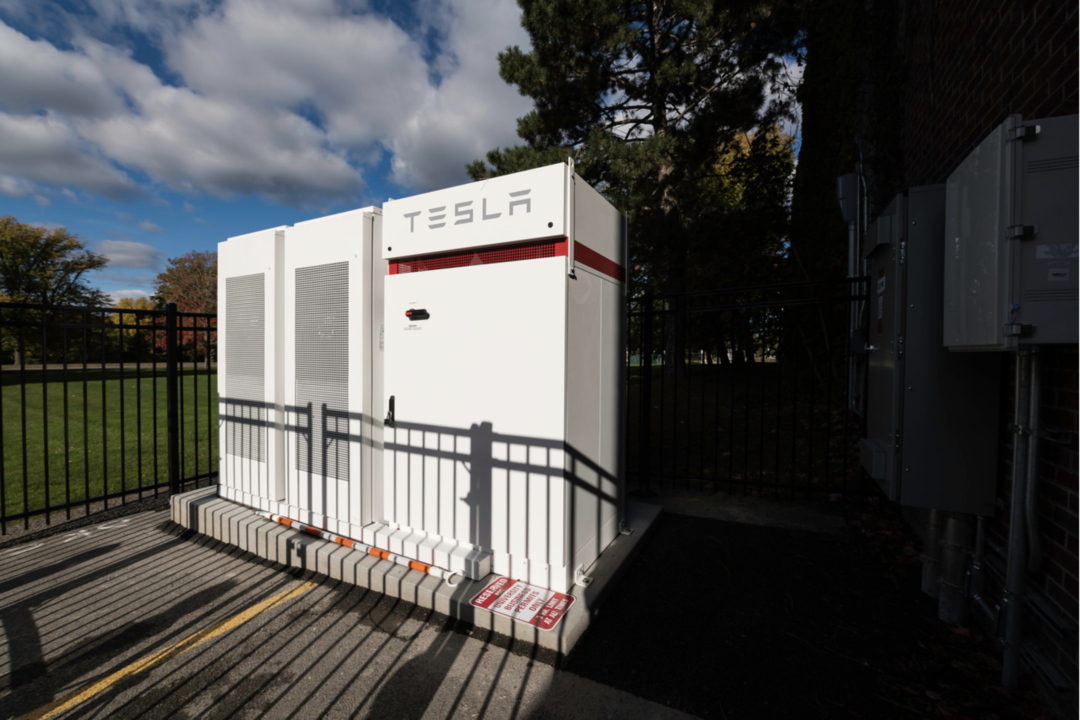 The system has the potential to counteract even more CO2 emissions if utilized in a different location with more sunlight. For example, if it were implemented in West Virginia, 346 tons of CO2 emission would be diverted. Yet, contrary to what one may be concerned about, the cloudy Rochester climate will not hinder the productivity of the solar array. There is plenty of sunlight for the system to collect and store energy within its TESLA batteries (pictured above).  The batteries store surplus energy produced by the solar panels when the sun is out and utilizes that energy when there is no available energy from solar power. The stored energy will compensate for fluctuations over minutes or hours, due to clouds blowing in or the sun rising and setting. This unique aspect of the project helps provide a consistent power supply while minimizing the need to turn to less sustainable energy resources.

“One of the goals of this system is to serve as a model that others may replicate.” Associate Professor Douglas Kelley states. Although construction of the new office building hasn’t begun, the solar panel project is ready to begin capturing solar energy in December.