In an effort to reduce CO2 emissions and reduce its impact on the environment, the University has been working to reduce fuel usage and replaced vehicles and equipment with efficient alternatives.

Recent Environmental Studies graduate Patricia Hanna analyzed vehicle efficiency for the Mail and Courier, Parking and Transportation, and Clinical Labs Departments. Through her research, she found that the current vehicles receive less than the expected miles per gallon which impacts emissions. With the help of Fleetistics, efficiency data was collected and used to pinpoint the main causes of fuel inefficiency, including idling.

The Mail and Courier Department set an original goal of a 25% reduction in idling, comparing fiscal year 2018 to 2019. This goal was surpassed and a reduction of 28.3% was met according to Patricia’s report. With the help of Fleetistics and more awareness, the goal is to diminish idling in fiscal year 2021 to less than 10% of operating time, which will result in both fuel and cost reduction.

In accordance with Patricia’s suggestions, the University purchased a Chrysler Pacifica Hybrid and a level 2 charger which allows the vehicle to charge in as little as two hours. The hybrid is usually charged during lunch hours and receives a 30% charge in 45 minutes. Currently the hybrid is performing between 50 and 80 miles per gallon.

The Horticulture and Grounds Department has also made an effort to reduce their fuel usage by investing in STIHL battery operated equipment (pictured below). “Zero emission, reduced fatigue and a dramatic reduction of noise pollution all without losing power were the deciding factors in purchasing this equipment,” according to John McIntyre, the Manager of University Horticulture & Grounds. 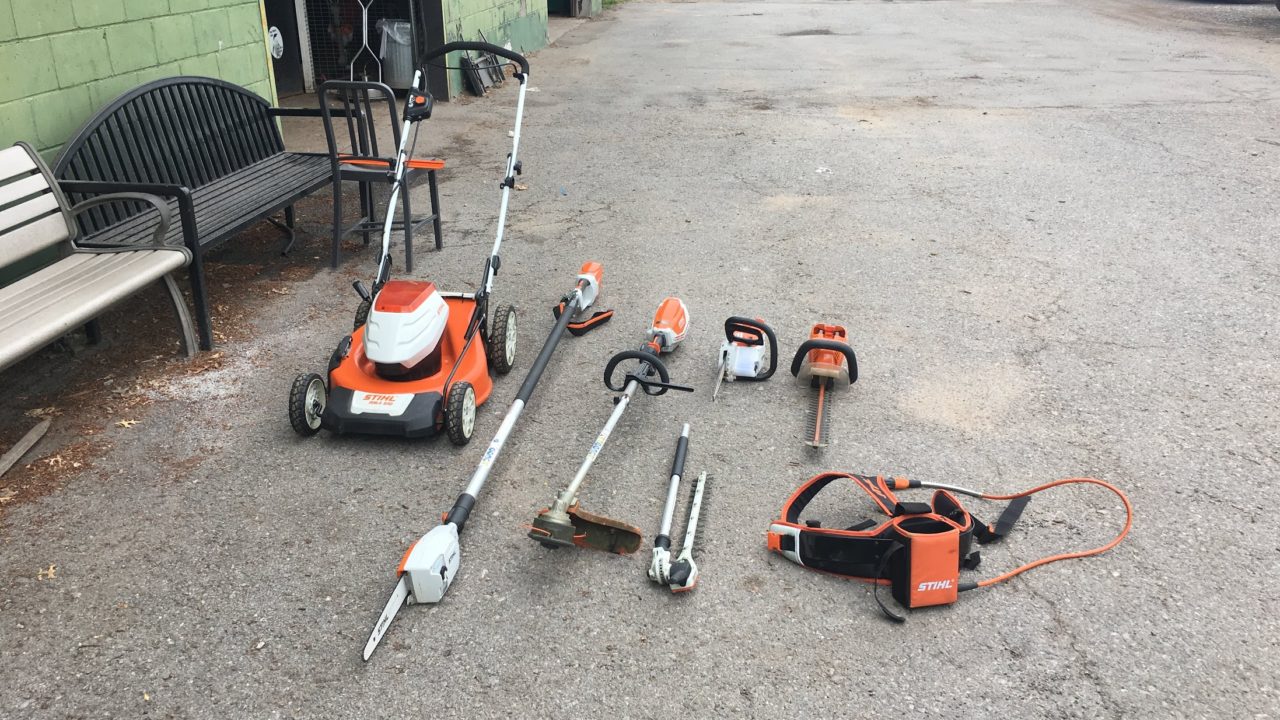 The department currently owns eight battery operated products including chainsaws, hedge trimmers, and mowers. The cost of the new equipment is almost equivalent to the price of traditional tools, but the purchases provide benefits the previous ones could not.

When in use, the battery operated equipment is not as loud as those fueled by gasoline which allows employees to work near highly populated areas such as dormitories and the Medical Center without creating a disturbance. The noise is quiet enough that there is no need for ear protection.

The battery operated tools are significantly lighter than gas powered and are easy to start and transport which will reduce injuries. Moreover, the absence of gas is beneficial to the environment and the health of the University’s employees. Members of the Horticulture & Grounds Department were skeptical of the new equipment at first, but are impressed with the performance and results they have seen.

Replacing vehicles with more fuel efficient or alternative fuel options, such as battery operated tools over gas powered, are obvious ways to lower carbon emissions. However, using tools like Fleetistics on existing vehicles helps to identify areas to decrease dollars and emissions through behavior change and vehicle maintenance as well. The University’s notable sustainability efforts have generated positive feedback.