This is not breaking news but it’s been coming up on our newsfeeds a lot these days. The unbelievable amounts of plastic in the oceans and washing shore. The sad pictures of how it is affecting wildlife, like turtles with straws stuck in their nostrils, whale carcasses that reveal guts full of plastics, people literally swimming in this stuff. The effect of our plastic consumption is downright depressing in these images. Sadly most often these items do not ever make it in the recycle bin and in many cases are not even a recyclable commodity. Now to make matters worse the global recycling market is going through major changes which will impact what plastics are recycled worldwide. China has cracked down on the amount of garbage coming from the American “recycling” market and we need to make changes to address our behavior. Can it get any worse right about now?

Thankfully, there have been some efforts out there to combat these issues. Municipalities worldwide have been issuing bans on single-use plastic items such as plastic bags, straws, and Styrofoam take-out containers. It is certainly going to take large and drastic measures to fight this problem now, but individual efforts to go “plastic-free” help to make a statement in these matters. 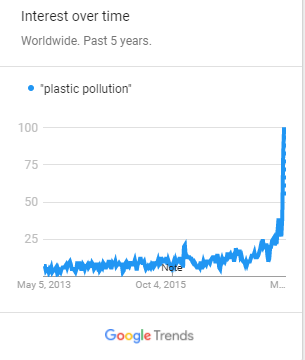 5.5+ Million content items about Earth Day 2018 and plastic pollution were created in the 17 most-spoken languages around the world, according to Google searches.

78+ Thousand downloads of our toolkits.

24+ Thousand people used our materials for educators and teachers.

23+ Thousand plastic cleanups of beaches, lakes, rivers, parks, trails were organized that we know of.

Clearly there is a lot of work to be done and perhaps the growing interest in the problem is good motivation to keep doing more! I recently came across 4 Ocean who will clean up pounds of plastic in the ocean for each bracelet that it sells. There must be other similar groups out there making strides as well.

If nothing else at least this topic is finally getting the attention it deserves!!