At the University of Rochester’s Central Utilities Plant, new, high efficiency LED light fixtures were installed to replace existing lighting. In the chiller high bay area of the plant, five 400W Mercury Vapor and fifteen 400W Metal Halide lights were replaced with a total of 33 new high efficiency LED light fixtures. More LED lights were installed than what were previously there; this was not a one to one replacement. Michael Yergeau Sr., Assistant Director of Utilities and Energy Management for the University, says that “the new LED lighting is expected to provide 30-foot candle illumination at various floor level work areas.” 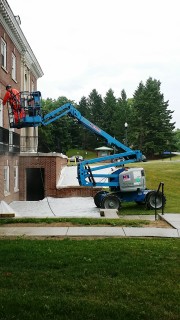 LED stands for light-emitting diode. LED lights have a lifespan and electrical efficiency that is much better than mercury vapor and metal halide lights, requiring less maintenance, replacement, and therefore producing less waste. They also provide a better quality light. By replacing the lights in the chiller high bay area with LED lights, the University saves thousands of dollars. The annual energy savings of the new lights is 38,290 kWh, translating to a savings of over $4,000 a year.

The project cost was $20,347 (which includes a New York State Energy Research and Development Authority, NYSERDA, Utility Incentive payment), resulting in a simple payback period of only 4.8 years.

The 38,290 kWh reduced energy consumption is equivalent to 2.4 homes’ energy use for one year or the carbon sequestered by 21.6 acres of U.S. forests in one year. (Source: http://www.epa.gov/cleanenergy/energy-resources/calculator.html#results)

The project did face a couple of challenges. Firstly, it was not as simple as replacing a light bulb. Large chiller equipment on the operating floor had to keep running throughout the three-day project. A special lift was used that had flexibility to move around the equipment. This is called an articulated lift, which is used for difficult to access areas. Safety was of utmost importance during the installation. Safety and installation coordination were successful due primarily to the efforts of Mark LePore and Steve Henrie of Central Utilities and Mike Paolicci of Smartwatt. The project was so successful that it was even finished one day ahead of schedule, and overall the Chiller High Bay Area lighting is much improved.

This project in the Central Utilities Plant is a part of other lighting initiatives. There are plans to replace more lights in the plant installing energy efficient lighting is an ongoing effort led by the University.

One Reply to “New LED Lighting at Central Utilities”