Happy Birthday America! To honor our nation’s day of independence, I am going to highlight some of the green things I encountered last month as my sister and I drove around the country !!

In Chicago, our friend who hosted us started a vertical garden in her kitchen, using mason jars, soil, and seedlings. She no longer has to go to the store to get basic herbs like basil, rosemary, mint, etc. and can use them fresh in her meals. It makes living in a city that much easier and enjoyable, especially with homemade mint ice cubes!

On our way down south, we stopped in Shawnee National Forest in southern Illinois, where the park rangers prohibited the use of drinking water for any washing purposes in order to prevent any chemicals from leaching into the water supply. There were also very strict “carry in carry out” rules in the park to ensure a trash-free environment.

Our second night in New Orleans, Louisiana, we ran into a Trash Trivia game in the center of Bourbon Street. The game involved answering miscellaneous trivia questions but only after placing a piece of trash in the proper sorting bins. The goal was to educate pedestrians about how to correctly recycle in a fun manner. The surrounding crowd was quite large and very enthusiastic about the game.

In Ocean Springs, MS we went to a Red, White, and Blueberry festival that was similar to a smaller-scale farmers market. They had a lot of information on the local farms of the area in order to promote supporting local farmers. One vendor there was selling birdfeeders made out of used wine bottles- a good way to reuse and reduce your waste! We also met local fishermen at the festival who were strictly against fishing with nets, and instead individually caught every fish they had with them at the market. This mitigates the possibility of bycatch and is a much more sustainable practice.

In Nashville, TN, a vendor at the Country Music Awards was giving away free pocket ashtrays as part of the Keep Tennessee Beautiful campaign. The pocket ashtrays encourage smokers
to wisely dispose of their cigarette butts that are otherwise tossed to the ground as litter. 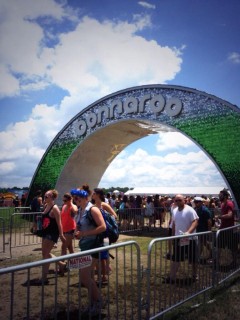 Our last stop was Bonnaroo, the renowned music festival in Manchester, TN. Upon our arrival, our car was given 2 bags: one for trash and one for recycling. Festivalgoers were rewarded for their recycling and waste collection with chances to win prizes (even tickets to ‘Roo 2015!). Bonnaroo emphasizes a sustainable experience through the efforts by the Clean Vibes organization. Check out the Sustainability page on the Bonnaroo website to learn more!

Celebrate America by acting green and keeping her clean!

Written by Ainslee Cunningham, class of 2014.