Overpopulation occurs if the number of people  in a region exceeds the carrying capacity of that area to sustain the group.  It is not something that is typically talked about when discussing environmental issues and how to reduce one’s impact. I remember way back in Freshman year when talking about the “biggest environmental crises facing the United States today”. Typical answers included deforestation, oil spills, fossil fuel dependence, air and sea pollution, etc etc. The professor surprised us all by convincingly and firmly denouncing overpopulation as the culprit. Of course it makes sense that more people means more resource use and expanse into natural areas. The InterAcademy Panel Statement on Population Growth has revealed that environmental problems, such as increasing levels of atmospheric carbon dioxide, global warming, and pollution, are worsened by population expansion.

This cartoon illustrates how the minor changes to our lives can only add up so much. We can turn off as many lights, drive fewer miles, buy organic, any of those things that are shilled as easy environmental changes to our lives. But they will only add up so much while the population grows exponentially. Nobody likes to consider drastic solutions to overpopulation. The only solutions discussed are either federal limits to family members (such as in China), increased education in female literacy and family planning, and extra terrestrial settlement. Yes, sending excess members of the population into space. 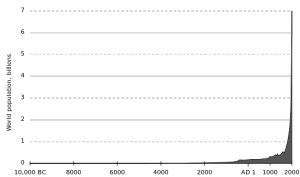 This graph illustrates the increase in population over time. Clearly this is not a level of population that the planet has experienced before. I’m not going to tell you to be child-free, but I’ll ask for you to at least consider having fewer children or none at all. It may not curb overpopulation in the near future, but it’s one of those small things that everyone can do to help the planet, just like turning off lights and biking to work.