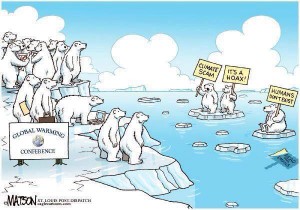 Enjoy the Student’s Corner global warming perspective political cartoon of the day. My favorite is the “Humans Don’t Exist” bear – it emphasize the absurdity that there is still a discussion over the existence of global warming. The sign underwater says “Read the E-mails” by the way.