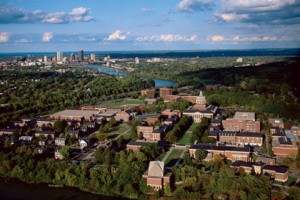 Planet Pals, even if you are not a member of the Republican party,  you’d have to be in a coma or enjoying a beautiful desert isle with no wireless connections not to know we are smack-dab in the middle of a fierce battle to see which candidate will represent the GOP in November’s election for President. So, in keeping with the spirit of the day, I’m gonna solicit your vote. Now relax, there will be no campaign speeches from your blogger that run longer than a Prius on a full tank, nor will I promise you a brand new world of kittens and unicorns then shake that promise like an Etch-A-Sketch.

The University of Rochester has been selected by the Arbor Day Foundation as one of the 10 Green Campuses to compete for a $1,000 prize as well as some terrific giveaways. Our competition is stiff, voters. The field is filled (I suppose “littered” would be a poor word choice) with beautiful, well-maintained colleges and universities. The fact that UR is one of the smaller schools to make the top ten says so much about the University, our wonderful community, University Facilities and Services and the Grounds department, led by manager Dan Schied and supervisor Mike Miller as well as a talented group of staff dedicated and devoted to their profession as you will ever encounter is an honor in itself (It’s an honor just to be nominated. Sound familiar?).

Well, the Green Corner doesn’t lie. The Green Corner wants to win this competition. All you have to do is vote. And you may do so through Face book at https://www.facebook.com/arborday?v=app_203351739677351

Now practice for your primaries or the general election in November and get out there (out there meaning cyberspace) and vote THE University of Rochester. You’ll feel great after you have voted. And that’s a promise this citizen has made and will keep.