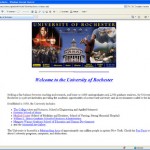 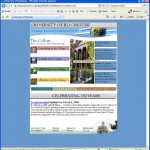 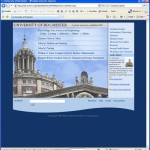 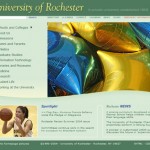 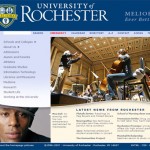 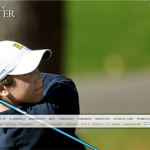 In fact, the first-ever homepage made a triumphant if temporary return this year as our April Fools’ special.
–lori

The first University of Rochester homepage was published in 1996, and as we prepage for the next incarnation of www.rochester.edu, I thought a trip down memory lane might be in order.

Here is that first page (check out the Internet Archive for a more in-depth look at the site).

To me the most striking thing about this design is how narrow that main top image is, while still managing to squish in no fewer than seven separate photos (and it’s a little tough to see in this image, but it looks like the crew team is rowing across the sky above Rush Rhees Library). Below that image the old HTML standbys of bulleted lists, bordered boxes, and horizontal rules are much in evidence.

It’s also amazing to think that in just about 10 short years the expectations for how a website should look have changed so drastically. Functionally, there’s not much wrong with the site; it doesn’t provide you with any opportunity to actually do anything, but as an aid to navigation it’s pretty straightforward. However, if a major university had such a homepage today, I think most users — especially prospective students — would be a little, shall we say, underwhelmed.