Over the past several months, editors and developers in University Communications and University IT have been experimenting with a new site for publishing news and feature stories from around campus. The goal has been to create a site that was visually appealing and engaging; easier to update and maintain than our homegrown site; University-wide in its scope; and more flexible in allowing us to explore new graphic treatments and storytelling techniques that are unique to the web.

This new site is now live at www.rochester.edu/newscenter/. The site is published using WordPress, the popular blogging tool and open-source content management system supported by University IT, and it uses the University’s responsive web templates. This responsive approach allows the content of the site to flow and adapt to the wide array of screen sizes and personal electronic devices readers now use to access the web. 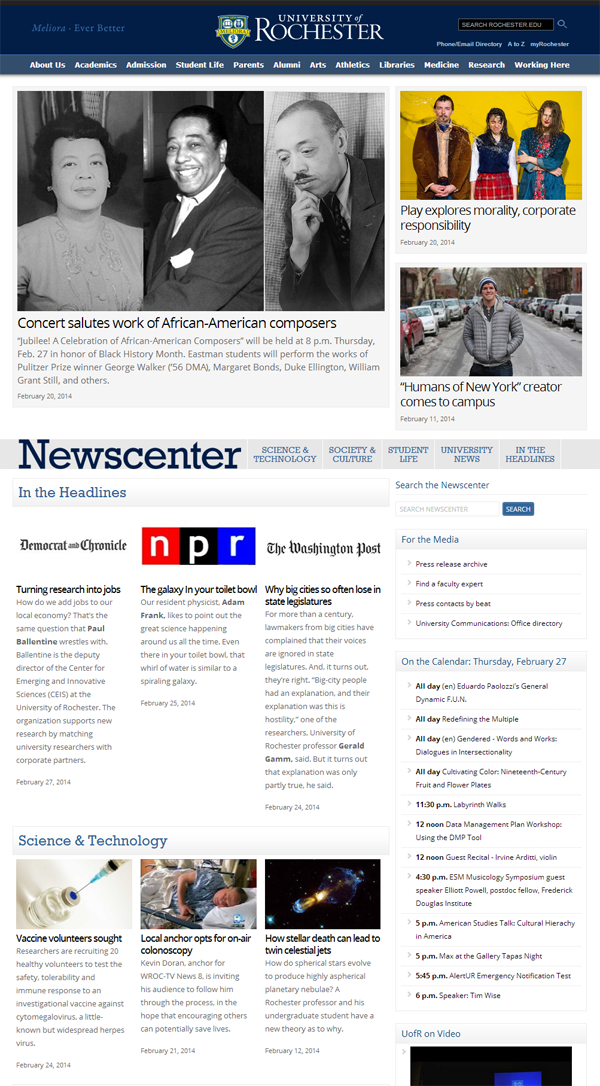 Take a moment to check it out; we would appreciate your feedback.

Another change we’ve made in the latest mockup of the homepage redesign (check it out here) is to replace the earlier ticker with a news “tabs” layout for news and events. (You can see the original ticker in action here.)

Some users commented that they liked the ticker, calling it “cool,” “neat,” and “interesting.” We certainly liked it, too. The idea behind the ticker was to be able to give individual news items their “moment in the spotlight” while still conveying the sense that there were lots of different things happening in the life of our major research University every day.

Though we liked the ticker approach, we did have a couple concerns: would users stop and attend to the ticker long enough to get the impact of the scrolling stories and actually read and learn about the stories were were trying to communicate, and would they think that anything that moved around of its own accord be more annoying and distracting than useful?

The answers to those questions were “no” and “yes.” No, users did not stop and read individual items as they passed by. Even prospective students in our initial usability studies, who commented that they liked the ticker, still didn’t bother to engage with any of the information it contained. And yes, faculty and staff visitors said they found the ticker irritating.

Hence the new “tabs” design. By using tabs, we can still convey the notion of “lots and lots of stuff” in a nice, tight space. I also think each of the news items gets a little more focus and attention in the new tabs design than they would have received if users had to wait to see them scroll by in the ticker.

Lastly, we’re playing with the idea of using “cutout” photos in interesting ways here, to visually draw attention to important stories and convey a sense of depth and even fun in this space. (Check out an example of a news item “cutout” here.)