The Rochester chapter of the American Physician Scientists Association is hosting Armin Raznahan, M.D., Ph.D., for a Fall Keynote event on Friday, December 2. He will be speaking at the NGP colloquium at 4pm, but Neuroscience students and PONS members may be interested in joining in the lunch with Dr. Raznahan as well.

Please RSVP for lunch via Elizabeth_Saionz@URMC.Rochester.edu.

Didn’t make it to San Diego for this year’s SfN meeting? Then come to the SfN-Rochester “Post-Mortem” poster session and reception to catch up on the great neuroscience research happening on campus! And even if you attended SfN, come check out the local posters that you didn’t have time to see.

All are welcome to present a poster. Please email Ania Dworzanski ania_dworzanski@urmc.rochester.edu with title and author info. 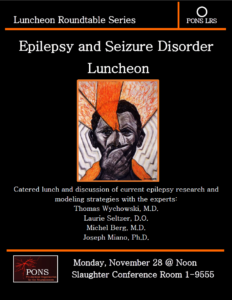 Hope to see you there!

The Rochester Chapter of the Society for Neuroscience will be screening “A Beautiful Mind” as part of its Neuroscience in Film Series.

Julie Fudge, M.D. (Depts. of Neuroscience and Psychiatry) will provide a short intro to the film and lead a discussion afterwards. All are welcome. Popcorn and soda will be provided!

“The true story of prominent mathematician John Forbes Nash Jr. is the subject of this biographical drama from director Ron Howard. Russell Crowe stars as the brilliant but arrogant and conceited professor Nash. The prof seems guaranteed a rosy future in the early ’50s after he marries beautiful student Alicia (Jennifer Connelly) and makes a remarkable advancement in the foundations of “game theory,” which carries him to the brink of international acclaim. Soon after, John is visited by Agent William Parcher (Ed Harris), from the CIA, who wants to recruit him for code-breaking activities. But evidence suggests that Nash’s perceptions of reality are cloudy at best; he is struggling to maintain his tenuous hold on sanity, and Alicia suspects a diagnosis of paranoid schizophrenia. Battling decades of illness with the loyal Alicia by his side, Nash is ultimately able to gain some control over his mental state, and eventually goes on to triumphantly win the Nobel Prize. Based loosely on the book of the same name by Sylvia Nasar, A Beautiful Mind (2001) co-stars Paul Bettany, Adam Goldberg, Anthony Rapp, Christopher Plummer, and Judd Hirsch.” — Karl Williams, Rovi