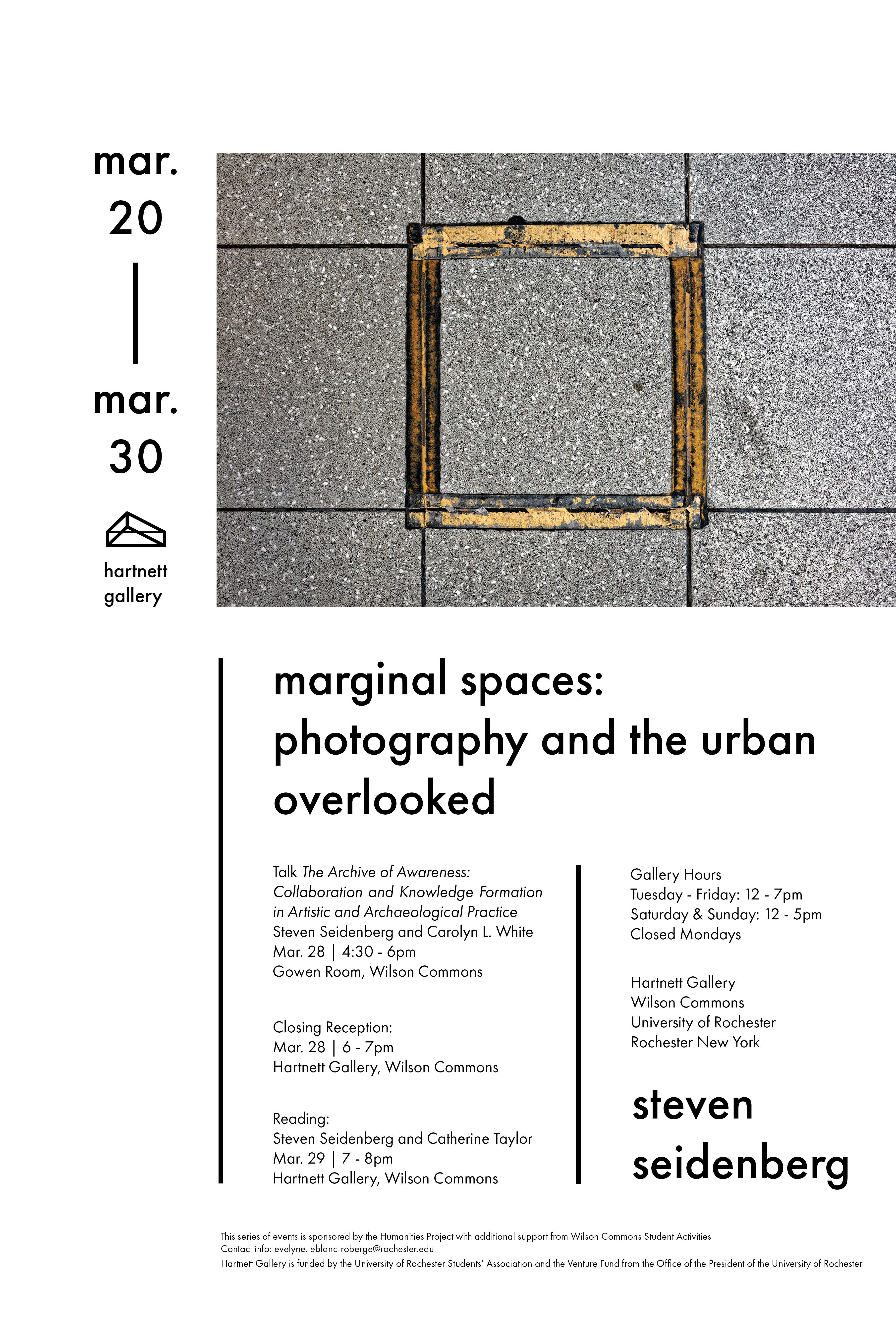 Hartnett Gallery is pleased to present Steven Seidenberg’s Marginal Spaces: Photography and the Urban Outlooked as the fourth exhibition of the 2017/18 calendar year. This project will bring to Rochester an exhibition of photographic prints, an interactive workshop along with a talk presenting the collaborative work of artist and writer Steven Seidenberg and archaeologist Carolyn L. White.

Photographer Steven Seidenberg chronicles objects and systems that are both out of sync and integral to the rhythms of modern life. His photographs, rich in the saturated colors of worn paint, rust, moss, and decay or filled with the geometric and biomorphic compositions of paint stains, faded adhesives, and found objects, document parts of networks that have lost their centrality. Examining Berlin apartment blocks, Tokyo subway platforms, or Czech cemetery dumpsters, Seidenberg captures features nearly lost in the margins of our urban worlds. The work uncovers the pictorial and the politic of materials that are cared for and attended to, yet often unseen by those who live beside them. As viewers, we are presented with things both foreign and familiar, exotic and commonplace, mesmerizing and readily overlooked — and ultimately offered the feeling of living in a new state of attention to the edges of reality. Marginal spaces matter.

Seidenberg trains his camera on objects and surfaces that survive the indifference of their surroundings. He draws upon the traditions of modernist urban and industrial photography, postwar conceptual photography, and the anthropological impulse that has fueled documentary traditions from the 19th century to the present. The resulting images remind us that change occurs in the spaces we call home, to the objects we use daily, and is shepherded and shared by the people, flora, and fauna with whom we share our cities. Like the work of social historians or contemporary archaeologists, Seidenberg’s photographs show the transformation of urban life and mark the effort that people put into the care and feeding of the world, whether through makeshift repair, natural decay, or expert maintenance.

The exhibition at the University of Rochester will present selections from two of Seidenberg’s recent photographic series. The series Tokyo Tape consists of photographs of found tape on the floors of Tokyo subway stations. The tape is used to provide direction for passengers, mark borders, indicate areas of caution, and instruct construction crews. The exhibition presents the array of abstracted images created from the practical and functional actions of unknown subway workers. The Pipevalve: Berlin series portrays a curious vestigial feature in the Berlin cityscape. While in Friedrichshain, Berlin, Seidenberg encountered a cast iron cleaning valve in drainage pipes on city buildings. Fascinated by the uniformly totemic affect and yet radically variable material character of these Reinigungsöffnung, he photographed the five or six located on the same block as his studio. As he walked further he realized the valves were concentrated in an area of only .5 square km that had been confronting the forces of gentrification overtaking the former east. Integral to this exhibition is an interdisciplinary investigation that Steven Seidenberg and Carolyn L. White have practiced in a variety of projects. The photographs demonstrate the pair’s interest in examining the world and producing records of it with a combination of artistic and archaeological methods. The two collaborators will present a talk titled The Archive of Awareness: Collaboration and Knowledge Formation in Artistic and Archaeological Practice. Seidenberg and White will discuss their various experiments in bringing Seidenberg’s practice as an artist and philosopher into collaboration with White’s work in archaeology and material culture analysis, a collaboration that reveals the limits and strengths of each practice in its efforts to limn an otherwise unseen history and cultural landscape. In each case, the activity of modeling the constructed space—whether presently inhabited or abandoned long ago—draws the attention of both practitioner and viewer/reader to previously unexplored details and compositional possibilities. Seidenberg and White will describe the ways in which their practices in general have been influenced by such revelation, and how their collaboration has grown to capitalize on the strengths and avoid the incommensurability of their disparate visions.

Artist and writer Steven Seidenberg has exhibited and read his work in venues throughout North America, Europe and Asia. He is the author of Itch (RAW ArT Press, 2014), Null Set (Spooky Actions Books, 2014), Situ (Black Sun Lit, 2018), numerous chapbooks of verse and aphorism. His collections of photographs include Pipevalve:Berlin (Lodima Press, 2017). Additionally, he coedits pallaksch.pallaksch., an occasional anthology of experimental poetry, curates the False Starts reading series at The Lab in San Francisco, and is a member of the Right Window artists collective.

Archaeologist Carolyn L. White is Associate Professor and Chair of the Department of Anthropology at the University of Nevada, Reno. Her work as an anthropologically focused historical archaeologist spans four centuries, focusing on the materiality of identity and personal appearance, 19th-century ranching in Hawaii, the built environment of Black Rock City, and the relationship between art and archaeology. Her most recent book, The Archaeology of Burning Man, is forthcoming from University of New Mexico Press (2018). She is also the Director of the Anthropology Research Museum and oversees the Historic Preservation Program.

This series of events is funded by the Humanities Project, with additional support from Wilson Commons Student Activities.