Sarah Friedland’s work between moving images and moving bodies investigates the mechanics of gestures and their political ramifications through hybrid forms that blend documentary, fiction, and experimental dance film. Her choreographic practice combines found movements from archival research, what Friedland calls “embodied interviewing”, improvisation, and adaptation, gathering together communities of performers and movers who range from professional dancers to students and aging individuals.

Assembled Choreographies centered on the visual language of movement. What is the relationship between movement and politics? How do our visual experiences of crowds shape our own mobility? What does the grammar of choreography make visible? How do we move in response to other bodies? How do we remember with our bodies? Like Yvonne Rainer, Friedland is interested in the synergy between bodies, spaces, and the embodied capacity to collectively remember and recreate everyday choreographies in connection with larger cultural and political formations. These are often patterns of movement that go unnoticed but that are the base of who we are and how we mediate with others around us. Friedland’s intimate choreographies are about how bodies learn from each other and how kinetics are assimilated, which is to say they are a lot about process.

Friedland designed a new digital interface for CROWDS with new media artist and designer Jonas Eltes to translate the 3-channel installation for an online audience for the first time. CROWDS investigates the choreography of crowd typologies and the slippages between them, blurring and destabilizing the thresholds between crowds in worship, protest, riot, and fascist spectacle, among others.

The exhibition program of Assembled Choreographies also included a screening of Drills (2020) and Home Exercises (2017) which comprise the first two films in Friedland’s trilogy centered on the politics of movement exercises. Drills interweaves active shooter drills restaged in a high school, corporate and tech start-up office meditation, and a reperformance of Boy Scout drills based on the 1917 Boy Scout manual, asking, as Friedland puts it, “what futures we are preparing for through exercises embodying present anxieties.” Home Exercises focuses on elders’ movements and gestures in domestic space, tracing choreographic patterns in the physicality of aging.

As part of the exhibition Hartnett Gallery commissioned Murmurations: A Conversation Between Sarah Friedland and Tess Takahashi on CROWDS, featuring a discussion between Sarah Friedland and Tess Takahashi, a Toronto-based scholar, writer, and programmer who focuses on experimental moving image arts. Murmurations was published after the exhibition in InVisible Culture: An Electronic Journal for Visual Culture (IVC). 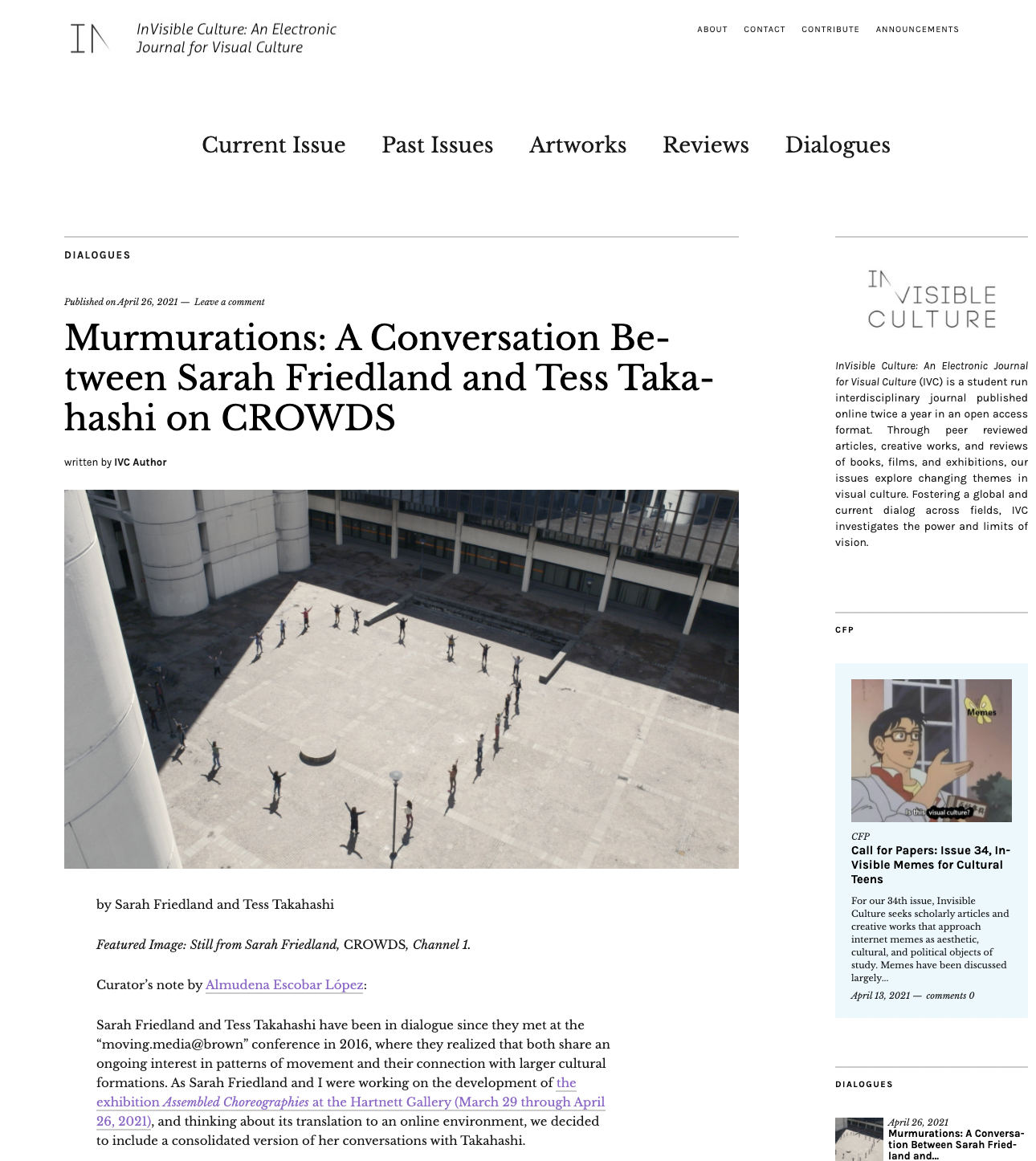 The CROWDS installation featured a Userway widget for increased accessibility while navigating the site. Additionally, an audio descriptive version of the first channel of CROWDS is available at this link. Closed captioning was provided for the screenings of Drills and Home Exercises on April 12th. An audio descriptive version of Drills was be available on this site.

Sarah Friedland is a filmmaker and choreographer working at the intersection of moving images and moving bodies. Her work has screened and been presented in numerous festivals and film spaces including New York Film Festival, New Directors/New Films, Ann Arbor Film Festival, New Orleans Film Festival, BAMcinématek, and Anthology Film Archives, in art spaces such as Performa19 Biennial, La MaMa Galleria, MoMA, Sharjah Art Foundation, MAM Rio, Nasher Museum, Wassaic Project, and Manifattura delle Arti (Bologna), and in dance spaces including the American Dance Festival and Dixon Place, among others. Her work has been supported by the Foundation for Contemporary Arts, Film at Lincoln Center, Dance Films Association, Art Factory International, NYSCA/Wave Farm, Rhode Island State Council of the Arts/NEA, Berlinale Talents, where she was one of 10 selected screenwriter/directors for the 2017 Script Station/Project Lab, and most recently by the Bronx Museum, where she was an AIM Emerging Artist Fellow in 2020. Sarah graduated from Brown University’s department of Modern Culture and Media and started her career assisting filmmakers including Steve McQueen, Mike S. Ryan, and Kelly Reichardt. Sarah has worked on collaborative research and writing projects with media theorists Wendy Chun on slut-shaming and new media leaks, with Erin Brannigan on the dancing body on film, and has an ongoing collaboration with writer, scholar, and programmer Tess Takahashi on masses and embodiment. She has taught workshops on dance film and been a guest artist at Brown, Yale, Skidmore, NYU Florence, and Reed, among others.

Jonas Eltes (b. 1993) is a computational / interactive designer & artist from Sweden, holding a diploma in Interactive Communication from Berghs School of Communication in Stockholm, leading up to his participation in the Google Creative Lab 5 programme in London where he met former London-based digital art studio Alpha-ville run by curator duo Estela Oliva & Carmen Salas whom he worked closely with from 2015 to 2016, assisting mainly with design & production; sparking his interest for the digital arts and the critical approach to the medium and eventually to approaching his own practice at Italian Communication Research Centre – FABRICA – where he recently finished a one-year fellowship investigating the societal side of digital communication. Born and raised on the early days of the World Wide Web, in the realms of digital and in the nature of anything. His practice focuses on investigating his own nature in the form of an ever growing relationship to machines, by employing computers as a tool to study and expose the complex dynamics of the signal based landscape and what new complexities might evolve around it; often represented through installations embodied in physical space offering new perspectives on the horizon of computation.

Tess Takahashi is a Toronto-based scholar, writer, and programmer who focuses on experimental moving image arts. She is currently working on two books, Impure Film: Medium Specificity and the North American Avant-Garde (1968-2008), which examines artists’ work with historically new media, and On Magnitude, which considers artists’ work against the scale of big data. She is a member of the experimental media programming collective Ad Hoc and the editorial collective for Camera Obscura: Feminism, Culture, and Media. Takahashi’s writing has been published there as well as in Cinema Journal, the Millennium Film Journal, Animation, MIRAGE, and Cinema Scope.

Please see the CROWDS installation above for more details on cast and crew.