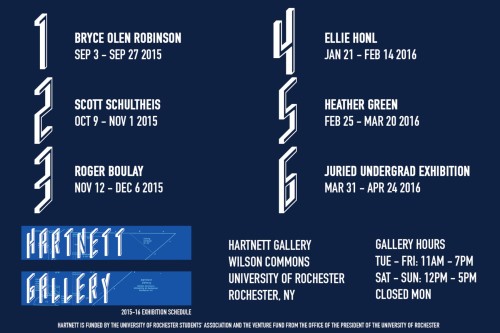 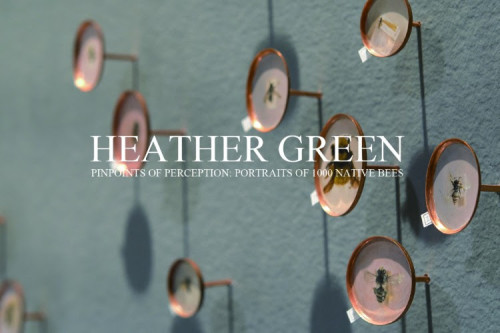 Pinpoints of Perception is an on-going mixed-media installation that moves between the cloistered world of the academic collection to a public art space, visually illuminating the vast bee diversity endemic to southern Arizona and northern Mexico through a display of life-size oil portraits of each of the 1,000+ species. It invites the audience to participate in the discovery of these diminutive and industrious creatures, paying homage to a vast but imperceptible abundance while simultaneously honoring the species themselves and the scientists who have been profoundly committed to their study and preservation. This project was inspired at an art/science research lab where Heather learned about Dr. Minckley’s research on bees.

Heather Green’s projects and installations examine historical and ecological narratives of the Northern Gulf of California and Sonoran Desert. The collaborative nature of her work has allowed her to ally with a diverse range of individuals including scientists, poets and ﬁshermen.

Green is a recipient of the 2011 Arizona Commission on the Arts Artist Project Grant, the 2010 Community Foundation of Southern Arizona/Buffalo Exchange Arts Award, and the Oregon College of Art & Craft Emerging Artist Residency in Book Arts. Her work has been shown in Uruguay, México, and in museums and galleries both regionally and across the United States. A native of Tucson, Heather currently works in Tempe as an Assistant Professor of Art at Arizona State University.

Dr. Minckley’s research focuses on the ecology and evolutionary advantages of pollen specialization in bees. Specifically, he is interested in the ecology of bees in the deserts of the United States and Mexico where the greatest concentration of species occur.

Dr. Minckley is a Senior Lecturer and Adjunct Assistant Professor in the Department of Biology at the University of Rochester. 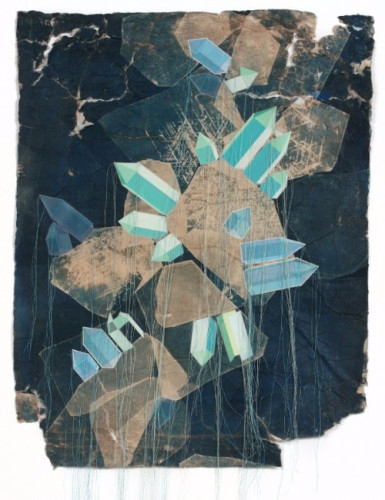 The Hartnett Gallery is proud to present “Refuge,” an immersive environment of silkscreen prints, alternative photography, and installation elements by Ellie Honl. This exhibit is informed by psychological theories surrounding coping strategies, Honl’s lifelong interests in architecture, and the literary genre of science fiction. Imagery of swarms and mysterious landscapes become a metaphor for the unreliable circumstances of life, while in contrast, geometric shelters represent places of safety and rationality. These structures embody the many different ways people cope with turmoil – both within and imposed. Underlying it all is the human desire to find stability in the unsteady present and unpredictable future.

Ellie Honl is a Visiting Assistant Professor of Printmaking at Indiana University in Bloomington, IN and is secretary of the Mid America Print Council. Combining printmaking, time-based media, and alternative photographic processes, her artwork has been widely exhibited across the United States and is included in many national collections. She has been awarded residencies at Vermont Studio Center and the Kala Art Institute, and has been a visiting artist at numerous universities and art centers. She has previously taught at Arizona State University, the University of Wisconsin-Stevens Point, and the University of Wisconsin-Eau Claire. She received her MA and MFA in Printmaking with a minor in Intermedia from the University of Iowa where she graduated with honors, and received a BA in studio art from St. Olaf College in Northfield, MN. Ellie is from Stevens Point, Wisconsin. To see more of Ellie’s work please visitwww.elliehonl.com 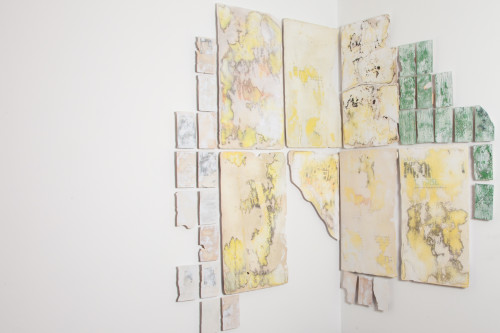 PULP by Roger Boulay takes increasingly outdated media like paperback books and records to explore the unstable, ephemeral consumption of popular culture. Pop and pulp narratives contain fleeting, momentary value and are quickly discarded. Stories are hyped, consumed and thrown away. The work articulates this cycle through Boulay’s use of erasure, palimpsests and fragmentary compositions that invite the viewer to consider our increasingly fractured relationship to interacting with information, songs and stories.

Roger Boulay was raised in Norfolk, Massachusetts, a suburb of Boston. He graduated from Amherst College in 2003 with a BA in Art and Art History. He has also earned a Master’s Degree in Art History from the Universiteit van Amsterdam and an MFA from the University of New Mexico. He currently lives with his partner and two dogs in Winona, Minnesota where he teaches and is the Gallery and Art Collections Coordinator at Winona State University. 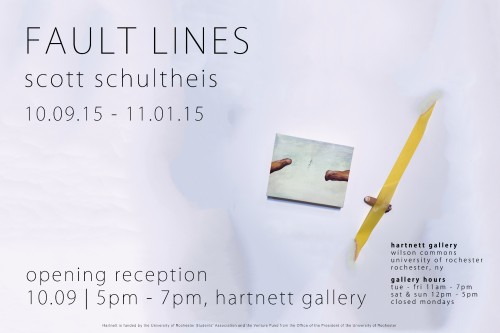 Opening Reception: Friday, October 9 | 5-7p.m.
Hartnett Gallery
***
FAULT LINES by ScottSchultheis (’09) combines replicable pieces of internet image searches with pieces of memories and stories. The works explore the interaction between the bodiless, oblivious stuff “out there” with distortive forces of the mental interior. This confrontation provides an opportunity for viewers to stretch elements of their seemingly immoveable experience.

Through paintings and installations, Schultheis seeks ways to uncover fractures in the impressions of our environments, our possessions and ourselves. Against the backdrop of a body that fills or purges itself automatically, how might we playfully rearrange the conditions of our reality in order to reveal more texture in our ideals and anxieties?

Scott Schultheis (b. 1986) was raised in the Morningside Heights neighborhood of New York City.  He graduated from the University of Rochester in 2009 with a BA in Studio Art and Art History.  After a stint in Brooklyn and some opportunities to travel internationally, he went on to receive an MFA from the Pennsylvania Academy of the Fine Arts.  He has been based in Philadelphia since 2011, cultivating a studio practice while engaging curatorial and educational community projects. 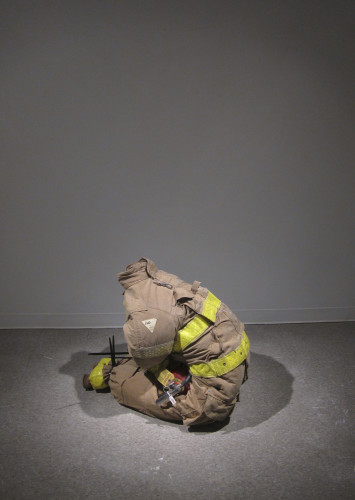 Bryce Olen Robinson grew up in the community of Ferguson, Missouri, now infamous for its structural segregation and civil protests. In this exhibition, Robinson investigates the tension between Ferguson as place and Ferguson as a cultural construct. These new works are the residue of his personal struggle to understand and redress his own point of origin. The pieces shown will represent a wide range of material approaches, including, but not limited to, sculpture, drawing, video, and performance artifacts. Robinson says: “Through art and life, I continue to bear witness to the effects of racism and structural isolation. As an artist I am committed to both making things and making things happen. Today I am interested in the histories that have defined the nature of my community…Through sculpture and public practice I engage with networks beyond the studio, developing projects that expand the collaborative agency of artists and communities. I am tracing the injustice of structural segregation and it’s lasting effect on my hometown.”