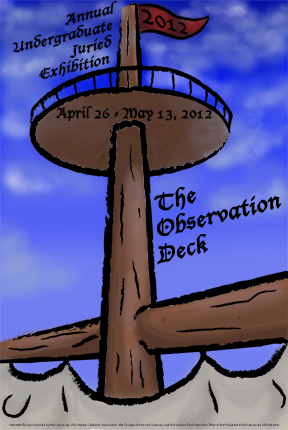 Hartnett Gallery is pleased to announce the exhibition “The Observation Deck: The Annual Undergraduate Juried Exhibition,” featuring work by current undergraduate students from all departments across the University of Rochester. The exhibition will open at Hartnett Gallery in Wilson Commons on Thursday, April 26th, and a reception will take place in the gallery from 5:00 to 7:00pm that evening. This exhibition represents a survey of the diversity of artistic practices that students engage with at the University of Rochester. From photography and digital work to painting and sculpture, all varieties of artistic media will be included in the exhibition. Hartnett Gallery hosts this exhibition each year in effort to support artistic creation on campus. Purchases prizes and awards for artwork will be announced during the opening reception.

The guest juror for the exhibition will be artist Kitty Hubbard. Hubbard is an Associate Professor of Art at The College at Brockport, State University of New York. She received her Masters in Fine Arts in 1998 through SUNY Brockport at Visual Studies Workshop in Rochester, and her Bachelor of Arts with a concentration in Photography from Guilford College in Greensboro, North Carolina. Since then her work as been exhibited throughout the United States as well as in Germany. Her images have been included in three major photography textbooks, and she is a contributing writer for “Afterimage: The Journal of Media Arts and Culture.” 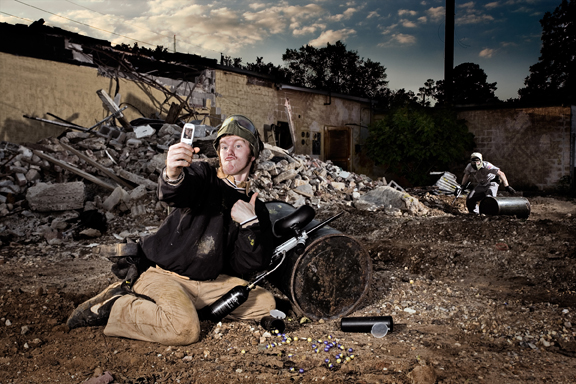 Simultaneously playful and profound, the digitally constructed images that constitute Andy Bloxham’s Fictions series offer a unique photographic vision of America and Canada. The seamless composites originate from photographs taken on an 18-day, 4,000-mile road trip following months of rigorous pre-production, storyboarding, and casting. Seen together, the images evoke a highly cinematic, surreal travelogue. Yet in an era of social networking and digital self-construction, Fictions also works incisively as a form of deeply authored self-portraiture, reminding us of the malleability of images and the way in which we instrumentalize them in producing new narratives of the self.

Andy Bloxham is a faculty member at the Maine Media Workshops and an assistant professor of art at West Virginia Wesleyan. He has mounted solo exhibitions at venues such as SRO Photo Gallery at Texas Tech University in Lubbock, Texas, the 1078 Gallery in Chico, California, and the Craft Studio Gallery at the University of Missouri in Columbia, Missouri, and his images have appeared in numerous group exhibitions, publications, and online media worldwide. He received his MFA in photography from Louisiana Tech University. 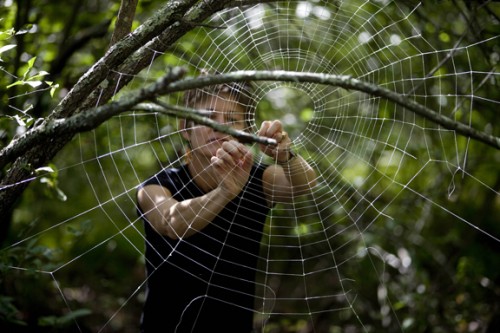 For her show at Hartnett Gallery, Kim Waale will design and construct an original, site-specific installation piece that responds to the unique conditions and configurations of the space.  Her work involves meticulous and elaborate knitting, webbing, and crocheting techniques to produce line and gossamer extending through space–what Waale calls “three-dimensional drawings.” Yet as expansive and immersive as Waale’s work is, it nonetheless remains intimate and delicate, emphasizing the materiality and texture of different fibers, wools, or wires.

Kim Waale is professor of art and director of the Studio Art and Photography programs at Cazenovia College in Cazenovia, New York. She is the recipient of grants and residencies from organizations including the Art Colony Galichnik in Macedonia, Sólo con Natura in Ecuador, the Harlech Bienniale in Wales, and the International Studio Program in New York City. Her work has been exhibited in museums and galleries such as the A.I.R. Gallery in New York, Hallwalls Contemporary Art Center in Buffalo, the Everson Museum in Syracuse, and the McCormick Freedom Museum in Chicago. In 2003, she co-authored the book “A Due Voci: The Photography of Rita Hammond,” published by Syracuse University Press. 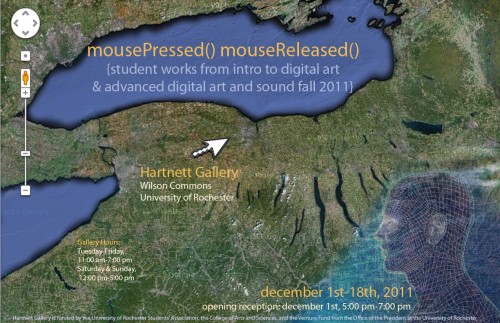 The Hartnett Gallery is pleased to announce the exhibition mousePressed() mouseReleased()—a group exhibition of works by undergraduate students in University of Rochester Professor Cary Peppermint’s Introductory Digital Art and Advanced Video classes. The exhibit will open at Hartnett Gallery on Thursday, December 1st with a reception from 5:00 to7:00pm in the gallery.

Combining both video and digital illustration, the exhibition will focus on the ability of technology of all varieties—from video games to social networking constructs—to simulate aspects of real life.

Digital illustrations, two-dimensional animation, and photo-imaging projects will focus on the visual language and aesthetics developed by technologies such as Google Maps that depict a digital reality that simulates the world we encounter every day. Using viewer participation involving interactive webcams and data visualizations, these projects aim to illustrate the convergence of the digital and real worlds, in particular what the intersection of these two very different realities looks and feels like as well as how we apprehend and understand the ways they come together.

Video projects in the exhibit will focus on narratives that explore first person video game play. By applying the aesthetics and attitude of digital gaming to real-world situations, these projects build on theories of  technology’s role  in how we perceive the world around us while enveloping viewers in an interactive, other world.

By examining the themes of technology, gaming, and the dichotomy between reality and the unreal, these student works seek to engage viewers in a participatory discourse about the current state of digital art and the subtle and world-shaping effects of digital culture on our lived experience. 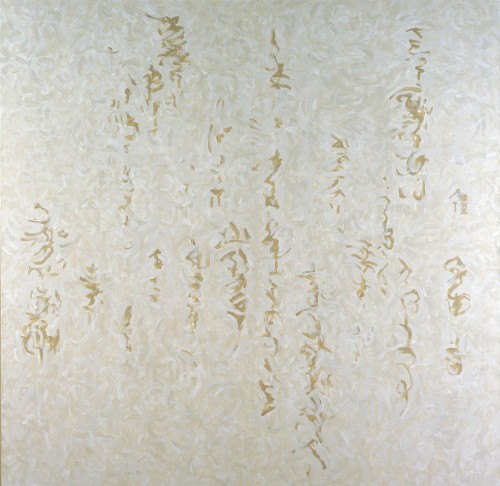 Hartnett Gallery is pleased to announce the exhibition Echo Sonata by University of Rochester alumna Rosalyn Engelman, held in conjunction with the University’s annual Meliora Weekend alumni celebration. The exhibition will open at the Hartnett Gallery on the main floor of Wilson Commons on Friday, October 21 with an artist’s talk and reception in the gallery from 4:00 to 7:00pm that evening.

Inspired by travel and Eastern art traditions, Rosalyn Engelman’s Echo Sonatapainting series alludes simultaneously to rich gestural traditions in painting, calligraphy, and music. From each work’s densely layered and rhythmically textured ground emerges calligraphic writing. These highly-worked canvases call the viewer’s attention to process and invite us to consider the artist’s gesture as utterance as well as the resonances between painterly and written language.

Accompanying the thirteen Echo Sonata paintings are historical Japanese poems, hailing from the Nara to the Edo Periods. The titles of many of Engelman’s works are drawn directly from these poems.

Rosalyn Engelman will give a talk about her work in the Hartnett Gallery on Friday, October 21 at 4:00pm. The opening reception will begin immediately following the talk and continue until 7:00pm in the gallery. All Hartnett Gallery events are free and open to the public.

Rosalyn Engelman is a New York City-based artist who graduated from the University of Rochester in 1978. She has had solo exhibitions at the Nico Gallery in Seattle, the Walsh Art Gallery at Fairfield University in Connecticut, Etra Gallery in Miami, Florida, and numerous galleries in New York. Her work is held in the collections of the Memorial Art Gallery, the Nigerian Embassy in Togo, Nigeria, and the City College of New York, among many others. 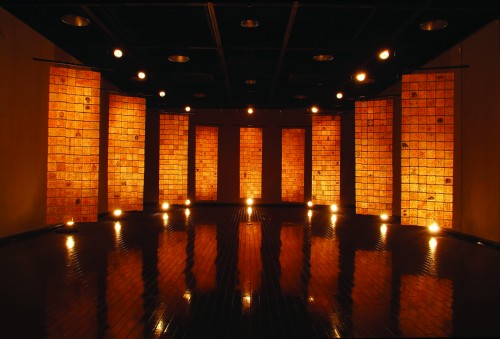 Naomi Kasumi’s ongoing project MEM: memory · memorial addresses pain, loss, and issues of cultural identity and heritage prompted by the artist’s experience with abortion. Each of MEM’s component projects, of which there are currently ten, places emphasis on ritualistic and ceremonial processes to create sacred and meditative spaces.

“MEM: no.7 scriptorium,” which will be presented at Hartnett Gallery, includes nine tapestry-like books hung from the ceiling, the translucent pages of which include Japanese calligraphy and Xerox images, butterfly wings and leaves, all painstakingly bound by white cotton threads. The immersive work memorializes the progress and development of Kasumi’s absent child, inviting reflection on the ways in which memory is constructed.

Naomi Kasumi will be at the University of Rochester on Thursday, September 8th at 3:30pm to give a talk about her work in the Gowen Room in Wilson Commons. An opening reception for MEM: memory · memorial will take place in the gallery following the artist’s talk from 5:00 to 7:00pm. All events are free and open to the public.

Naomi Kasumi is an Associate Professor of Fine Arts and Asian Studies at Seattle University, where she is also the director of the Digital Design Program and the Siena Study Abroad Program. She received a MFA and BFA in visual design from the University of Oregon, and a BA in sociology from Bukkyo University in Kyoto, Japan. Her preferred media include artist’s books, digital and traditional printmaking, multi-media installations, and video, and she has exhibited her work in Japan, Washington, Alaska, Oregon, Georgia, Illinois, and Colorado. In the spring of 2011, Kasumi completed an artist’s residency at the Sanskriti Pratishthan Residency Program in New Delhi, India.