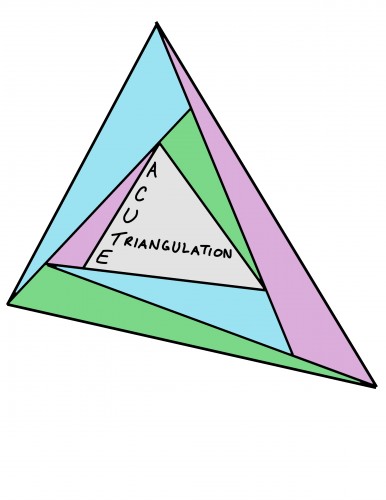 Hartnett Gallery is pleased to announce Acute Triangulation: The Annual Undergraduate Juried Exhibition, with work by current undergraduate students from all departments across the University of Rochester campus. The exhibition will open at Hartnett Gallery in Wilson Commons on Thursday, April 21st, and a reception will take place from 5:00 to 7:00pm that evening. This exhibition represents the diversity of artistic practices that students at the University of Rochester engage with. From photography and digital work to painting and drawing, all varieties of artistic media are chosen for the exhibition. Hartnett Gallery hosts this exhibition each year in effort to support artistic creativity on campus.

The guest juror for the exhibition is visual artist Colleen Buzzard. Buzzard’s interests center on exploring how information systems, like language and maps, influence our thinking. She uses a wide variety of materials, and art works range from two dimensional to sculpture and installation. Her work has been exhibited in the UK and USA, and her current studio is based in Rochester, NY. 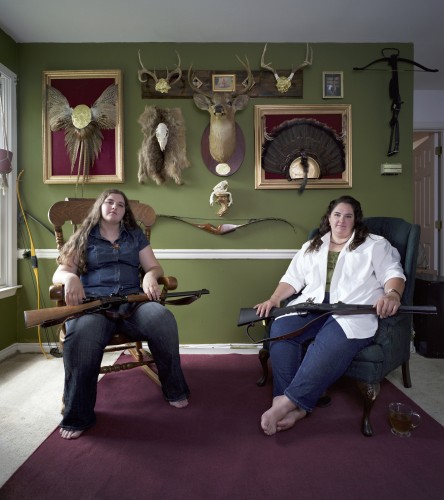 LeJeune photographs women hunters across the United States in their homes or hunting lodges. These portraits question the relationship between the domestic sphere, traditionally the woman’s space, and the hunting world, a typically masculine realm. Her photographs feature the bow and arrow, the hunting dog, stag and animal pelts—attributes of Diana, the strong, graceful Roman goddess of the hunt—to further explore this dichotomy.

Margaret LeJeune will be at the University of Rochester on Thursday, March 17 at 4:00pm to give a talk about her work in Haven’s Lounge in Wilson Commons. An opening reception for The Modern Day Diana will take place in the gallery following the artist’s talk from 5:00 to 7:00pm. All events are free and open to the public.

Margaret LeJeune is an Assistant Professor of Art at Lyon College in Batesville, Arkansas. She received an MFA in photography/visual studies from the Visual Studies Workshop in 2002 and a BS in studio art from Nazareth College in 1998. Her work has been exhibited at the Griffin Museum of Photography, ARC Gallery, The Center for Fine Art Photography, Newspace Center for Photography and in numerous national invitational and juried exhibitions. Recently, Roxana Marcoci (Curator of Photographs at the Museum of Modern Art) awarded LeJeune 3rd Prize in the 2010 Curator’s Choice Award at Center for her series The Modern Day Diana. LeJeune is a native of Rochester, NY.

Visualizing Difference: Birds of a Feather 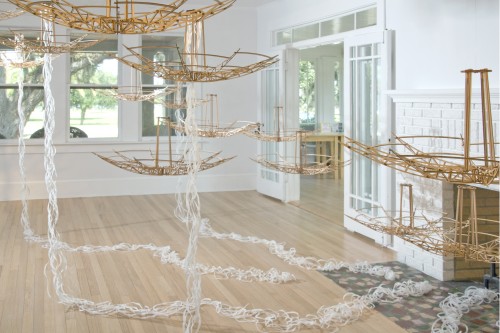 Hartnett Gallery is pleased to announce the exhibition Visualizing Difference: Birds of a Feather, a video and sculpture installation by artist Meg Mitchell that will be on display January 27th through February 27th.

In Visualizing Difference: Birds of a Feather, Mitchell investigates the relationships between science, information technology, and the natural world by mapping avian genome data as spiraling sculptural forms. She uses custom software to interpret and re-present the genetic sequences of various bird species, illustrating the similarities in the data despite the visual and morphological differences between the birds.

Mitchell explains, “Through the process of computer programming, I have begun to draw visual connections between biological, simulated and artificially constructed forms. I am intrigued not only by the forms themselves, but also by how the same concept can carry different cultural associations that are contingent on the material.”

In her current project, the various bird species act as “foils for human differences,” and Mitchell provides “an alternative way of viewing genetic data made physical in a humorous and playful context.” Visualizing Difference: Birds of a Featherraises questions about the ways science attempts to understand the natural world, as well as the growing presence of information technology in society.

Meg Mitchell will be at the University of Rochester on Thursday, January 27th at 4:00pm to give a talk about her work in the Gowen Room in Wilson Commons. A reception for “Visualizing Difference: Birds of a Feather” will take place in the Gallery following the talk from 5:00 to 7:00 pm. All events are free and open to the public.

Meg Mitchell is an artist based in Tallahassee, Florida, working in video, digital media, performance, and interactive installation. She received her BFA in Sculpture from the University of South Florida in 2004, and her MFA in New Genres from the University of Maryland, College Park in 2008. She is currently a faculty member at Florida State University, and has taught courses in digital practices, conceptual design, electronic media, drawing, and 2D design. Mitchell’s work has been exhibited widely in Florida and across the United States. 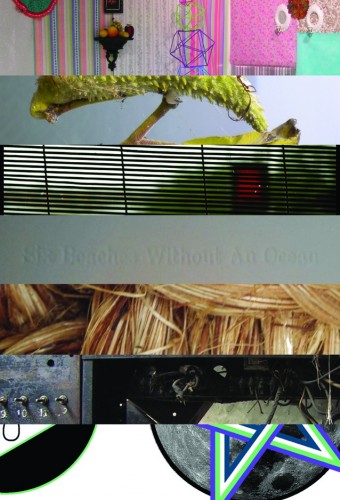 The Hartnett Gallery is pleased to announce the upcoming group exhibition Misty Rubric: The VCS Graduate Holiday Show. Showcasing the art work of current PhD students in the Visual & Cultural Studies Program at the University of Rochester, Misty Rubric will feature book art, digital art, installation, sculpture, and video. The exhibition will open on Wednesday, December 1st, 2010, with a reception that evening in the gallery from 5:00 to 7:00 pm, and will continue through Wednesday, December 15th.

The artists taking part in Misty Rubric are Ryan Conrath, Abigail Glogower, Shota Ogawa, Ryan Randall, Zachary Rottman, Genevieve Waller, and Lina Zigelyte. A “rubric” is something that connotes order and purpose–fixed categories, set limits, and known functions. Overlaying this rigidity and predictability with a veil of mist adds uncertainty, romance, and obfuscation to the strict schema–qualities that these artists advocate and explore.

The Visual & Cultural Studies Program began in 1989 and has a history of admitting students who are both artists and scholars. It offers an interdisciplinary doctoral degree that draws on anthropology, art history, film and media studies, history, literature, and philosophy. 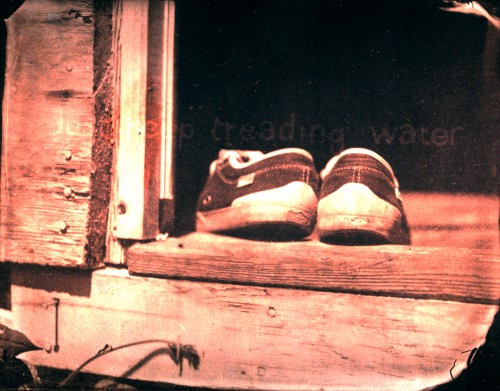 Heather F. Wetzel’s exhibition (in)securities & exchange addresses a timely financial theme, revolving around money and the anxiety that its absence or loss can produce. Inspired by nineteenth-century photographic processes and papermaking, Wetzel borrows from the structure and concept of the megalethoscope slide, a form of photographic entertainment invented my Carlo Ponti around 1870. When these slides were placed in a viewer in which the light source could be changed from reflected light to transmitted light (or from in front of the slide, in the viewer’s position, to behind the slide, the image transformed to present a scene of astonishing color and light.

To make her slides, Wetzel creates salted paper prints from wet-plate collodion negatives on handmade paper comprised of the same fibers that make up U.S. currency. The prints will be displayed in hand-made, wall-mounted light boxes, operated by the audience manipulating the dimmer switch. Rather than morphing from monochrome to color as in the megalethoscope, text embedded in the prints as watermarks becomes visible as the light source changes from reflected light to transmitted light. Thus images of everyday scenes will be transformed to reveal economic concerns communicated through the watermarks in the paper.

Wetzel explains, “These images are vignettes of mundane scenes one might observe in their everyday activities, while the text reveals the insecurities so many of us are facing in these uncertain economic times. The concerns and worries are hidden just beneath the surface of our thoughts and actions, not always evident to outsiders but persisting throughout our everyday activities.” These insecurities are revealed through the action of light, an experience that is enhanced by the juxtaposition of the open, public gallery and intimate nature of the prints in the viewing devices, underlining “the feelings associated with current financial pressures and the guilt and stigma often associated with being in debt—feeling restricted and confined while at the same time, feeling alone and lost.”

The exhibition will be accompanied by stacks of handmade “bills” that viewers can exchange for a dollar and take home. The exchange portion of this body of work is meant to transform over the course of the exhibition, allowing the audience to take home a piece of the exhibition with them—by exchanging US currency for handmade bills, viewers are able to participate in a currency exchange. The bills are presented on a pedestal and illuminated from below, symbolizing, according to Wetzel, “the status financial wealth holds in our society.”

Heather F. Wetzel will be at the University of Rochester on Friday, October 15th at 3:30pm to walk through the exhibition with Gallery visitors. A special Meliora weekend reception for (in)securities & exchange will take place in the Gallery following the walk-through from 4:00 to 6:00pm. All events are free and open to the public.

Heather F. Wetzel is an artist currently living in Iowa City, Iowa, working in historic photographic processes, book arts, and hand papermaking. She graduated with an MFA from the Visual Studies Workshop in 2005 with a specialization in Historic Photographic Processes, and has recently completed the University of Iowa Center for the Book Graduate Certificate Program where she studied hand papermaking, book arts, letterpress printing, and the history of the book. Wetzel has worked as an instructor of photography at Edinboro University in Edinboro, PA, and has led workshops at Penland School of Crafts in Penland, North Carolina, Visual Studies Workshop and Genesee Center for the Arts Community Darkroom in Rochester, and Chester Springs Studio in Coatesville, Pennsylvania. Wetzel has exhibited widely in galleries and art centers in New York and across the United States.

Variations on the Platonic Solids 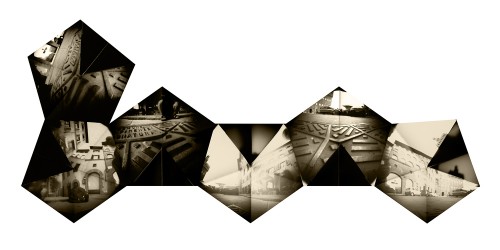 Neal W. Cox constructs pinhole cameras based on the platonic solids, a group of geometric volumes each composed of an even number of identical sides. Rather than using his cameras to create a representation of a particular subject, Cox collects “ordered samples of light” and uses these “light marks” as the building blocks of complex, ordered compositions which reflect the structure of the geometric models upon which the cameras are designed. Each camera, with its multiple film planes, produces photographs that combine the various planes of the geometric structure to reveal the surprising interplay of line and shape. From the precision of the forms emerge serendipitous relationships among the individual traces of light within each composition.

Neal Cox will be at the University of Rochester on Thursday, September 9th at 4:00pm to give a talk about his work in the Gowen Room in Wilson Commons. An opening reception for Variations on the Platonic Solids will take place in the gallery following the artist’s talk from 5:00 to 7:00pm. All events are free and open to the public.

Neal Cox is Assistant Professor of Art at Stephen F. Austin State University in Texas. He received an MFA in printmaking from the University of Texas at San Antonio in 2004, and a BFA in printmaking from Brigham Young University in 2002. In San Antonio, Cox was the Master Printer for the UTSA Collaborative Editions program. He has taught drawing and printmaking at the Majestic Ranch Arts Foundation and printmaking at the Santa Reparata International School of Art in Florence, Italy. He works in a variety of media, and has exhibited prints, drawings, and photographs internationally. He is a native of Provo, Utah.