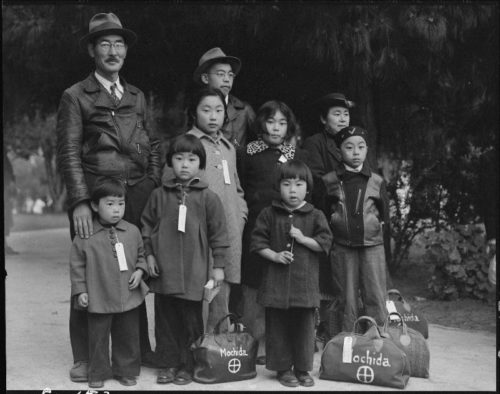 Events are free and open to the public. Refreshments will be served during the reception on November 17th.

Two months after Japan attacked Pearl Harbor, 120,000 people of Japanese ancestry living on the West Coast were forcibly removed from their homes and placed in remote “relocation” camps. Almost two-thirds were second- or third-generation Japanese-American citizens born in the U.S.

In the rush to comply with President Franklin D. Roosevelt’s order, many families were forced to sell homes and businesses, often at a fraction of their value. Throughout the war they lived in tarpaper barracks surrounded by barbed wire and guard towers.

“Looking like the Enemy: The WWII Japanese American Experience,” is a Humanities Project exhibit and lecture organized by Joanne Bernardi, associate professor of Japanese, which will examine the experiences of interned Japanese- Americans – and their relevance to current debates about terrorism, the refugee crisis, and illegal immigration.

The lecture, “A Pilgrimage to World War II Japanese-American Internment Camps,” will begin at 5 p.m., Nov. 16, in the Gowen Room of Wilson Commons. Notch Miyake of Rochester will describe the journey he took with photographer Margaret Miyake to the remote, desolate sites where the internment camps were located.

The exhibit ,featuring Margaret Miyake’s photographs in the Hartnett Gallery of Wilson Commons, begins with a reception from 5 to 7 p.m. Nov. 17, and runs through Dec. 11. The photographs are supplemented with postcards and other ephemera from Bernardi’s Re-Envisioning Japan Collection.

“While this exhibit acknowledges the injustice done to incarcerated Japanese Americans during World War II, it focuses more on what can be learned from their responses to their incarceration,” Bernardi says.  Inside barbed wire enclosures, the internees created viable, self-sufficient communities. They drained swamps and irrigated deserts to grow crops to feed themselves. And they sent their young men to serve in the 442nd Regimental Combat Team, the most decorated U.S. military unit in the war, and one with a high rate of fatalities. “At the same time, greater awareness of the Japanese-American interment through exhibits like this one can help the nation avoid repeating the conditions that led to the violation of rights of so many innocent people,”Bernardi says. The lecture and exhibit complement Bernardi’s course, “Atomic Creatures: Godzilla,”which examines U.S.-Japan cultural attitudes toward nuclear armament and nuclear imagery in popular culture after the United States dropped atomic bombs on Hiroshima and Nagasaki near the end of World War II.