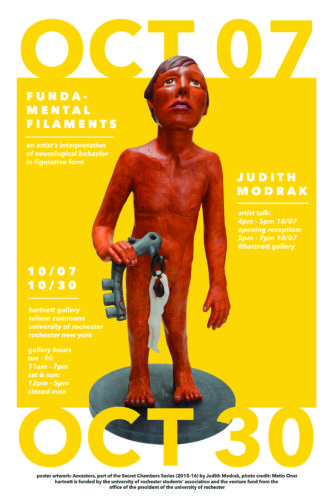 ROCHESTER, NY – The Hartnett Gallery is pleased to present Fundamental Filaments, a five year survey of work by Award-winning, New York-based sculptor, Judith Modrak, an alumna of the University of Rochester. The opening reception and artist talk will be held during Meliora Weekend.

For Fundamental Filaments, Modrak will present 15 of her pigmented plaster cast sculptures from four different series: Dendrites, Vital Memories, Ancestors and Standing.  Sculptures from Dendrites and Vital Memories elegantly and tenderly unravel the mysteries of the mind in anthropomorphic form, while works from Ancestors and Standing rebuild them in representational form. Fundamental Filaments weaves together a powerful story of internal brain functions and their corresponding human emotional states.

Judith Modrak is a figurative sculptor based in New York City whose work explores interior landscapes from psychological and neurological perspectives. She has exhibited in solo and group shows in galleries, museums and art fairs throughout the United States, including the Los Angeles Contemporary Exhibitions, the Chelsea Art Museum, the Trenton Art Museum, Point Park University, the Woodstock Museum, Art New York and most recently on Governors Island. Modrak has received a chashama/National Endowment for the Arts grant, and two gold medals in sculpture from the National Association of Women Artists, among other honors. Her work has been featured and reviewed in literary, scientific and news publications, including SciArt Magazine, ASCI, Sculpture Magazine, and The Pittsburgh-Tribune.

Over the past decade, Modrak has studied, investigated and interpreted in representational form the role of microscopic brain cells — specifically neurons and dendrites — and their affect on the human psyche. Of particular interest to her are the mechanisms responsible for triggering and regulating thought, memory and emotion.

When asked by Rochester Review Associate Editor Karen McCally what an artist’s rendering offers that scientific investigation does not, Modrak reflected ”for me, art has always been a tangible expression of one’s experience. In my figures, I want to translate feelings of vulnerability, uncertainty, and anxiety to provide a lens for other people to explore their own feelings, which can be unsettling, though equally cathartic. My sculptures provide a three-dimensional emotional interpretation of phenomena and experience. From earliest times, humans have sought ways to leave testimony that their lives mattered. I really do view the artist as a visual anthropologist of sorts. In my case, I’m rendering a very small sliver in the overarching timeline of human evolution. And at this particular time, I’m struck by the amazing advances in neuroscience. Collectively we understand what’s happening in our brains in a way that we never have before. It’s really quite astounding.”Modrak has degrees from the University of Rochester and the San Francisco Art Institute. For more information about Modrak and her work, visit http://judithmodrak.com and instagram/facebook @ Judith Modrak.