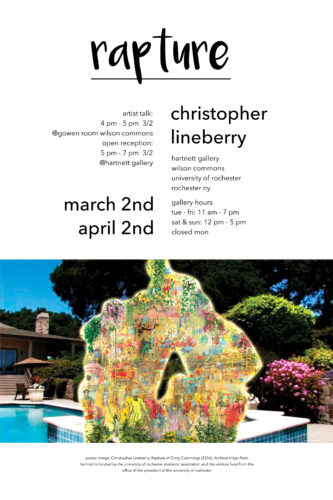 Hartnett Gallery is pleased to present the second solo exhibition of the 2017 Spring Semester!

Join us for an opening night reception celebrating Christopher Lineberry’s RAPTURE, an exhibition interrogating US empire through the human body itself.

This exhibition expresses Lineberry’s negotiations of queer sexuality with an evangelical upbringing in North Carolina. Reflecting on a pervasive American Southern evangelist psyche, Lineberry looks to the biblical Rapture: the sudden disappearance of all Christian bodies taken to Heaven before the world comes to an end, to better understand current cultural norms.

Lineberry approaches these biblical narratives as necessitated by US military occupations, particularly in the Middle East, as “engineered conflicts made to appear as divine harbingers of the end, pointing to the imperial psyche of American Southern evangelism.” However, in ‘Rapture-ing’ the hegemonic male bodies of gay porn video stills, the artist also questions how dominant queer representations – normalized and assimilated by secular democratic ideals – resonate with the same terms of national conquest as those culturally inscribed in the biblical Rapture. The featured bodies in RAPTURE become vessels for the flow of ideology, emptied by the prospect of sudden disappearance, whether by divine will or pawns of state erasure.

Speaking to the historic social relegation of queer identities, Lineberry replaces the Raptured pornographic bodies with compositions of surplus, while suggesting the possibility for continued re-invention. As ‘rapture’ is loaded with cultural and biblical associations, it also terms intense pleasure or joy. RAPTURE works to critically reclaim queerness from otherwise stifling stigmas, ultimately rendering empowerment over shame.

Enjoy complimentary snacks and beverages in the Gallery following an artist talk in the Gowen Room.