When the novel Go Set a Watchman came out I did not want to read it. I heard all of these reviews about how it painted this character Atticus Finch as a racist. I remembered growing up in the south and reading To Kill A Mockingbird and admiring this character who, even as a white man from the south in the 1930’s, was able to stand up for the rights of a black man. The idea that he may be ruined scared me away from reading the book for a while. However, now that I have finished it I am glad that I read the novel. As I read the novel I found myself understanding something different than what I was expecting. Yes Atticus Finch held some troubling ideals, but I found myself feeling like maybe it wasn’t him who changed, maybe it was Jean Louise.

To Kill A Mockingbird is narrated from the first person perspective of a six-year-old Jean Louise. Go Set A Watchmen is in the third person, but very much through a twenty-something Jean Louise’s eyes. That is a big age difference and a huge difference developmentally between the two novels. To see the stories through her lens we get an inherent narrator bias. As a six year old she idolized her father. “Jean Louise had never known her mother, and she never knew what a mother was, but she rarely felt the need of one,” (Watchman, 116). He was her only parent and he was in her eyes the picture of what a hero was. As the audience, that is what we saw as well. Since we only read her side of the story we know little about Atticus’ motivations and what was said when Jean Louise was playing with Jem and Dill and not listening in on her father’s work. Now she is in her twenties, she has lived away from Maycomb and developed some of her own ideas about right and wrong from her time away. Since she came back to Maycomb her eyes have been opened to the things that were wrong with her hometown and even her own family.

I also think it is important to note that this might be the first time that she is being exposed to the bigotry in her hometown. In Go Set a Watchman it seems as though Atticus won Tom Robinson’s case back when Jean Louise was six. “[Atticus] took his stand before a jury, and accomplished what was never before or afterwards done in Maycomb County: he won an acquittal for a colored boy in a rape charge. The chief witness for the prosecution 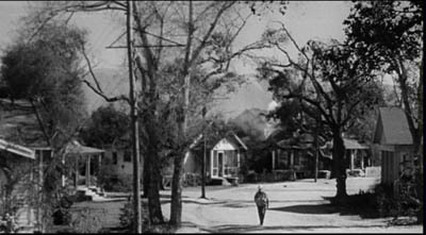 Maycomb County Alabama from the film To Kill A Mockingbird.

was a white girl,” (Watchman, 109). The loss of the case was something that was a point of trouble for the children in To Kill a Mockingbird. “It was Jem’s turn to cry. His face was streaked with angry tears as we made our way through the cheerful crowd… ‘It ain’t right, Atticus,’ said Jem. ‘No son, it’s not right.’” (Mockingbird, 212). The children had a hard time trying to understand how a jury could convict a man who, in their eyes, was so obviously innocent. If Atticus did win the case then theoretically Jean Louise would have never experienced that turmoil. That would mean that this is the first time where she finds that someone is questioning or defying her morals. This could add to the pain because revelation for the first time in her twenties is harder than if she had realized at as young as six that this was an issue.

I personally have had similar experiences to Jean Louise’s struggles. I have found myself disagreeing on big issues with some of the people in my life who I love the most. It is extremely difficult to find that this person that you have looked up to in life and who you love so dearly holds some terrible views. However, even if it is a point of disagreement that I care a great deal about, I have found it impossible to completely dissociate myself from someone so important to me. In the novel it is Jean Louise’s father, who she revered her whole life. She struggles a great deal when his beliefs differ from her own morals, but in the end she still loves him dearly. I can relate to Jean Louise in this sense. While this may be troubling to many, it is a very realistic scenario. I have found, for myself, this book has provided a great deal of clarity and has allowed me to connect with the characters further than I was able to in To Kill a Mockingbird. Atticus has become a more human and less godlike character, and Jean Louise has new stories and troubles that I relate to greatly.

7 thoughts on “The Demystification of Jean Louise”