Social media has increasingly become a common form of expression, and a tool to rally causes behind. The tremendous success of the ALS Ice Bucket Challenge and the fervor behind the Harambe movement demonstrate the world’s increasing globalization and community. But behind the memes and social fads, there is an indisputable dark side of social media. Beginning in the early 90’s and gathering momentum through the introduction of the iPhone and other smart devices, cyberbullying has gained a worldwide audience as new and increasingly horrific stories are unveiled daily of children being harassed to the point of suicide (Ornstein 1). But rarely does cyberbullying extend to the adult sphere. Perhaps because of the assumed stability of an adult’s mental condition, or perhaps because those who punished the cyberbullying youths have no one to punish them. But regardless of the reason, the term rarely coincides with the life-ruining harassment that occurs on social media between adults.

“They have been accused and veritably found guilty of providing funds to anti-gay organizations.”

Adam Mark Smith, former CFO and treasurer for Vante, was protesting the unfortunately common practice of large corporations funding “hate groups” or organizations which rally behind controversial causes. In the case of Chick-Fil-A–the company Smith was protesting–they have been accused and veritably found guilty of providing funds to anti-gay organizations. The groups they fund “proudly and aggressively” advocate for the criminalization of people within the LGBTQ+ community, and even promote the idea of killing members within that community. Not only has this all been well documented, but Chick-Fil-A has never tried to dispute these claims (Windmeyer). So however justified Smith was in his outrage, his attempt to rally people behind the cause through a social media video was a complete and utter failure.

“”[Elizabeth] accepted his apology, and there were no hard feelings.”

Seen harassing a Chick-Fil-A employee, Smith was haranguing the lowest employee on the totem pole, the drive-through window worker. While his cause was valid, it is completely incomprehensible the chain of thought which led him to believe that harassing a lower level employee would make any difference in the places Chick-Fil-A’s money is going. However rude his verbal assault was, it is not by any means the crime of the century, and there is no doubt the woman has dealt with worse. After the social media crowd began their trial and conviction of Smith, he released a video apologizing to the woman for his actions. In response, the employee Rachel Elizabeth issued another public video stating that she accepted his apology, and that there were no hard feelings (Pendleton). It is interesting, then, that the mob never set down their pitchforks. 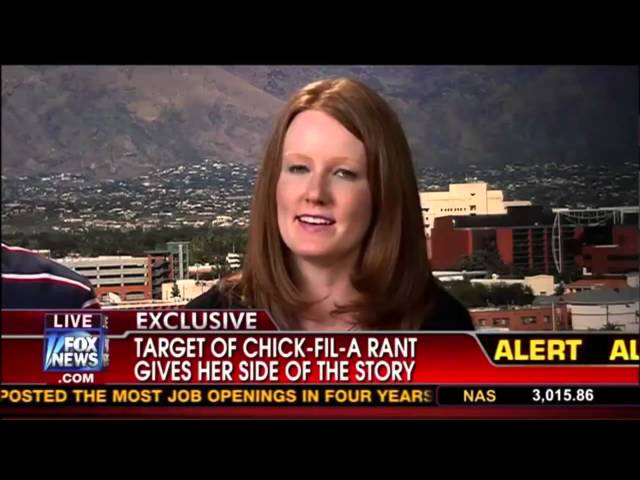 “Why could Elizabeth forgive Smith, and not the public?”

So why could Elizabeth forgive Smith, and not the public? The answer is simple: while social media may not diminish people’s ability to express empathy in the real world, it is a medium over which empathy does not always extend. It is far easier for the mob mentality to take over on the internet, as one does not see the direct impact their words have on the person they are attacking. Thus, in today’s world the capacity for empathy is still very much there, only the internet and social media have created a place where empathy does not need to be expressed. When typing something hateful, it is easy not to understand the way it reads to others, or the impact that the words have, as there is no intonation in text, nor facial expressions on the computer (Wayne). “Smith is still unemployed after being fired the day after his video went viral.”

Smith is still unemployed after being fired the day after his video went viral. He is being punished for supporting a good cause, though undoubtedly the wrong way. It would be interesting to see the effect if the social media rallied their attention and fervor behind his cause, rather than persecuting Smith for two minutes of mistakes.

Elizabeth forgave Smith for his misguided attempt to incite the people using social media. While his method backfired, it does illustrate the important point that people make mistakes, and social media makes it immeasurably easier to criticize people for them. It is important to consider a person beyond the one tweet or Facebook status that made them famous, because a person is more than the sum of their social media. It is only through this practice can empathy begin to breach the world of internet and social media. So in the end we should all take a page out of Rachel Elizabeth’s book, and learn to forgive social media users for their faux-pas, as it could be any one of us who commits one next.