In Morton’s essay “Empathy for the Devil”, the overarching theme is how empathy plays a role in committing atrocities. He argues that emotion felt when attempting to empathize with people who have committed atrocities is skewed due to the inability to truly understand. He, however, defines empathy as representing the other persons’ emotions in one’s mind and having an accurate perception, rather than truly feeling what they feel. 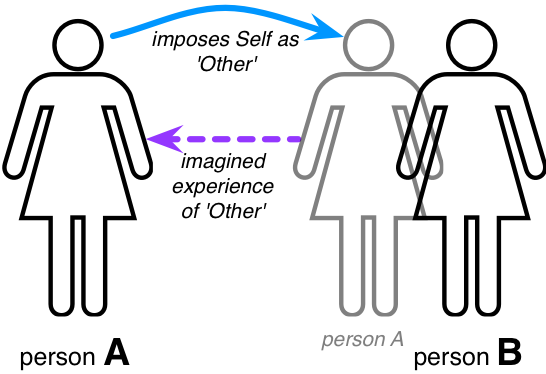 One example he provides is the interactions between persons A and X, X who instigated a mildly racist confrontation when he was running late and A who assaulted his co-worker and is now in jail. To this, he says when X tries to empathize with A, X blows things out of proportion, leading to pseudo-empathy, a term he defines as when one thinks they understand another’s feelings, but is really just what one thinks they would feel.

He references Adam Smith, and how Smith defines empathy to show how when one thinks that another person had responded to a situation in the same way they would, empathy is felt, and if not it is difficult to find empathy.

This difference in empathy is in part owed to what Morton calls a barrier in empathy, an obstacle that prevents one from empathizing with all people, especially those who do terrible things, and prevents most people from committing crime. Because of this, Morton labels the lapses in empathy as the “blinkering effect of decency” (Morton 329). This is when people empathize all too easily in everyday situations, but stop themselves from empathizing with a bad person because they do not want to draw such parallels between themselves and people who do terrible things. Morton appears to end his essay on the note that the blinkering effect of decency is something that humans need to change in order to better understand one another on a less selfish level and develop a better understanding of true empathy.

While it has been acknowledged that empathy has many benefits, empathy also has its shortcomings. To wholly embrace empathy without skepticism is foolish, and although Morton does not do this, he is of the belief that more empathy can help people attain a wider and more insightful perspective. But more is not always better. The reason why we do not feel empathy for people who commit atrocities in the first place is because they have done something morally objectionable whereas most other people have not, allowing for a double standard of empathy. Moreover, empathy can end up clouding judgment if one mulls over a situation for too long as opposed to helping one reach a fair conclusion. Contrasting Morton’s doubt in the blinkering effect of decency, I believe that there is an underlying purpose to our tendency to empathize under certain circumstances as opposed to others. In Fritz Breithaupt’s, “Empathy for Empathy’s Sake: Aesthetics and Everyday Empathic Sadism,” Breithaupt states that it is possible to feel empathy for all people but the choice to do so is not always admirable nor desirable (151).

Because there is emotional investment that comes with empathy, it is logical to be selective in doling out empathy, to minimize the risk of losing one’s sense of self should they become too involved. Thus defeating the purpose of trying to gain a more insightful perspective. Breithaupt notes cases of Stockholm Syndrome and Hostage Identification Crisis as downsides to having empathy for terrible people to the extent that one’s own priorities and sense of self can be lost (Breithaupt 154).
In this sense, the double standard of empathy is sensible, albeit self-serving. It allows humans to indulge in empathy in situations where there is nothing to lose and something to gain emotionally — that “warm empathic feeling,” colloquially known as the warm fuzzies (Morton 330). Conversely, it becomes easier to distance oneself emotionally from an atrocity, both out of not wanting to admit something that terrible could be closer to oneself than originally thought, but also out of a sense of self-preservation.

While Morton criticizes the double standard that is applied to empathy, this double standard is functional. The blinkering effect of decency serves a larger purpose that preserves judgement and identity and would not exist without a good reason.

13 thoughts on “Blog #4: The Functional Double Standard of Empathy”