Most Americans recall the Watergate Scandal when they think about President Richard Nixon, but we can also thank Nixon for signing the Education Amendments of 1972. The statute included a portion that has impacted the lives of girls and women for almost 40 years. We know that portion as “Title IX.” 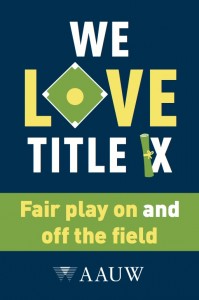 On Saturday America celebrates the 40th Anniversary of Title IX, which states that “No person in the United States shall, on the basis of sex, be excluded from participation in, be denied the benefits of, or be subjected to discrimination under any education program or activity.”  Congresswoman Patsy T. Mink coauthored the first version of Title IX, which was reworked and introduced to congress by Senator Birch Bayh before President Nixon signed the bill on June 23, 1972. While Title IX does not explicitly name women’s sports, it has become most well know for its influence on high school and college athletics.

In further Title IX news, Secretary of State Hilary Clinton announced earlier this week that the State Department will be partnering with ESPN and espnW to develop and implement a global sports mentoring program as part of the Empowering Women and Girls Through Sports initiative. The campaign was developed to encourage the “improved health, greater self-esteem, and greater academic success” of women and girls through their involvement in sports.

And what of the future for Title IX? How has the policy played out, and where does it fail? As Title IX turns 40, legislators, athletes, educators, and advocates have much to think about. In a recent New York Times article, William C. Rhoden discussed recent forums and symposiums that were organized to address “what’s not being said about the Title IX anniversary.” Title IX was a landmark policy in terms of gender equity, but it has done little-to-nothing for racial equity in women’s sports. Title IX, particularly within the context of athletics, has served for the advantage of girls from predominately white and middle to upper class families. It’s time to re-imagine a Title IX that includes and empowers women of color on a broader scale, and one that also considers and combats the ways in which class barriers restrict access to all of Title IX’s benefits.

Happy Anniversary, Title IX! We thank you for all the remarkable changes you’ve already accomplished, and we look forward to making you better.

Former Program Assistant at the Susan B. Anthony Institute for Gender and Women's Studies at the University of Rochester.
View all posts by Kaitlin Legg →
This entry was posted in News and tagged #Activism, #equality, #social justice, #sports, #title ix. Bookmark the permalink.