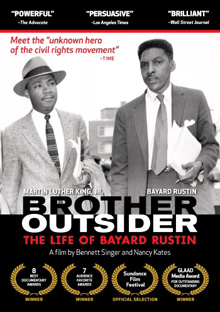 Rustin is best known as an organizer of the 1963 March on Washington, but fell away from America’s memory of the civil rights movement, mainly because of public discomfort with his sexual orientation during a pre-gay rights, pre-Stonewall sociohistorical context.

…Rustin was silenced, threatened, arrested, beaten, imprisoned and fired from important leadership positions, largely because he was an openly gay man in a fiercely homophobic era. Five years in the making and the winner of numerous awards, BROTHER OUTSIDER presents a feature-length documentary portrait, focusing on Rustin’s activism for peace, racial equality, economic justice and human rights.

Today, the United States is still struggling with many of the issues Bayard Rustin sought to change during his long, illustrious career. His focus on civil and economic rights and his belief in peace, human rights and the dignity of all people remain as relevant today as they were in the 1950s and 60s.

The film screening is free and open to the public. Parking at the University is free at 7pm! Visit our website for directions to Hoyt Hall Auditorium.

Former Program Assistant at the Susan B. Anthony Institute for Gender and Women's Studies at the University of Rochester.
View all posts by Kaitlin Legg →
This entry was posted in UR Events and tagged #filmseries, #LGBTQIawarenessmonth. Bookmark the permalink.