Out in Reel Film Series Kickoff

The Nazi persecution of homosexuals may be the last untold 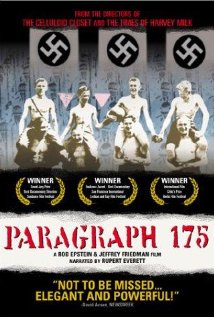 story of the Third Reich. Paragraph 175 fills a crucial gap in the historical record, and reveals the lasting consequences of this hidden chapter of 20th century history, as told through personal stories of men and women who lived through it: the half Jewish gay resistance fighter who spent the war helping refugees in Berlin; the Jewish lesbian who escaped to England with the help of a woman she had a crush on; the German Christian photographer who was arrested and imprisoned for homosexuality, then joined the army on his release because he “wanted to be with men”; the French Alsatian teenager who watched as his lover was tortured and murdered in the camps. These are stories of survivors — sometimes bitter, but just as often filled with irony and humor; tortured by their memories, yet infused with a powerful will to endure. Their moving testimonies, rendered with evocative images of their lives and times, tell a haunting, compelling story of human resilience in the face of unspeakable cruelty. Intimate in its portrayals, sweeping in its implications, Paragraph 175 raises provocative questions about memory, history, and identity.

The film also complements an upcoming traveling exhibit from the US Holocaust Memorial Museum. The exhibit, titled “Nazi Persecution of Homosexuals 1933 – 1945,” will be hosted at the Jewish Community Center in partnership with the Gay Alliance of the Genesee Valley from May 23 to July 22.

View the full calendar of April’s events and download the poster from the University of Rochester’s Office for Faculty Development and Diversity.

Former Program Assistant at the Susan B. Anthony Institute for Gender and Women's Studies at the University of Rochester.
View all posts by Kaitlin Legg →
This entry was posted in College Events, SBAI Events, UR Events and tagged #filmseries, #LGBTQIawarenessmonth. Bookmark the permalink.