Celebrating and Recognizing the Works of Women: Women in Music Festival 2012

This guest post comes from Sylvie Beaudette, Assistant Professor of Chamber Music and Accompanying at the Eastman School of Music,  Director of the Women in Music Festival, and Director of Summer@Eastman. 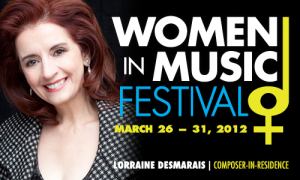 Next week, the Eastman School of Music’s Women in Music Festival will celebrate its 8th anniversary.  Since its foundation, the festival has presented music by nearly 160 women composers in 7 weeks.  For those who are not familiar with the classical music world, this number might seem pretty slim.  But I assure you that it is indeed quite a feat!

The festival has generated great interest and, in a way, a matter-of-fact element to choosing and hearing a work by a woman composer.  At the Eastman School of Music, faculty and students have found, through the festival, a venue where they can perform something unique that, most likely, nobody has heard before.  Since the founding of the festival, performers from the Rochester Area have increasingly programmed works by women composers for their own concerts.  The fact that our local symphony, the Rochester Philharmonic Orchestra, has presented with great success several works written by women is testimony that the minds have changed, that performers and audiences alike want to enjoy the music, regardless of its creator’s gender.

However, is it ghettoizing women to have such a festival?  As I often respond, men have presented their own “Men in Music Festival” for the past 1000 years, so I don’t feel so bad to exclude them for one week a year. Without being preachy, the festival is rather a celebration of women’s musical output, despite of the social context in which they lived and the demands forced upon them through the ages.  When I hear a beautiful piece by Fanny Mendelssohn, I keep thinking:  “What would she have done, if she had had the same opportunities as her brother Felix?”  Of course, we’re not living in the 19th century but glass ceilings are still hard to break.  I recall a remark by an older man attending one of our concerts just last year:  “I didn’t know there was such a thing as a woman composer.” And he meant it in the basic sense.  One mind opened just at that moment, isn’t that what matters?

Two years from now, in 2014, the Women in Music will celebrate its 10th anniversary (hard to believe, even for me!).  We have a few names in mind for the big celebration but it would be wonderful to hear from you.  So, here’s my question:

Which composer should be the composer-in-residence for the Women in Music Festival’s 10th anniversary?

I am curious to read your suggestions!

Former Program Assistant at the Susan B. Anthony Institute for Gender and Women's Studies at the University of Rochester.
View all posts by Kaitlin Legg →
This entry was posted in UR Events and tagged #guestblogger, #womeninmusic, #womenshistorymonth. Bookmark the permalink.