Join us this Wednesday, March 21, at 7pm in Hoyt Auditorium at the University of Rochester’s River Campus for a screening of Mother: Caring for 7 Billion, the next film in our “Passionate Representations: Women’s History Month 2012” series, presented in partnership with The Little Theatre. 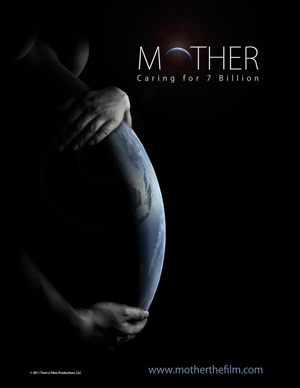 Mother, the film, breaks a 40-year taboo by bringing to light an issue that silently fuels our most pressing environmental, humanitarian and social crises – population growth. In 2011 the world population reached 7 billion, a startling seven-fold increase since the first billion occurred 200 years ago.

Population was once at the top of the international agenda, dominating the first Earth Day and the subject of best-selling books like “The Population Bomb”. Since the 1960s the world population has nearly doubled, adding more than 3 billion people.  At the same time, talking about population has become politically incorrect because of the sensitivity of the issues surrounding the topic–religion, economics, family planning and gender inequality. Yet it is an issue we cannot afford to ignore.

Grounded in the theories of social scientist Riane Eisler, the film strives not to blame but to educate, to highlight a different path for humanity.  Overpopulation is merely a symptom of an even larger problem – a “domination system” that for most of human history has glorified the domination of man over nature, man over child and man over woman. To break this pattern, the film demonstrates that we must change our conquering mindset into a nurturing one. And the first step is to raise the status of women worldwide.

Former Program Assistant at the Susan B. Anthony Institute for Gender and Women's Studies at the University of Rochester.
View all posts by Kaitlin Legg →
This entry was posted in SBAI Events and tagged #film, #filmseries, #womenshistorymonth. Bookmark the permalink.