This post comes from Mary Greitzer, Assistant Professor of Music Theory, who will be presenting her work “Shrieking the Body Electric: the Traumatized Voices of Diamanda Galas and Babbitt’s Philomel” on January 27. Read on to learn more about Diamanda Galas, trauma, cyborgs, and more! 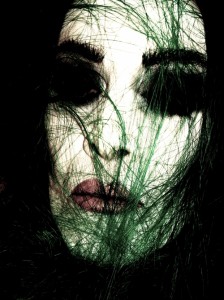 This project uses ideas from Donna Haraway’s 1985 “Cyborg Manifesto” in an analysis of electro-acoustic musical works for solo female voice which thematize trauma. Haraway’s feminist vision seeks to undermine hierarchies by celebrating cyborgian boundary crossings in a technologically-mediated world .  In considering how these pieces so effectively inscribe trauma into the human/electronic performing voice, I will address their cyborg mergers of embodiment with disembodiment, humanity with technology, and man with animal. Discussion of text, form, structure, and performativity further reveal the permeability of boundaries among the performer’s body, the protagonist’s body, the traumatized body, and the listener’s body.

Diamanda Galàs’s Schrei X (1995) is a sonic translation of human savagery. Using her formidable voice as a weapon, Galàs becomes the trauma she seeks to portray, isolating and imprisoning each listener by performing in total darkness at maximal volume. Our understanding of Galàs’s portrayal of tormenter, tormented, and witness deepens when we contemplate these roles in light of her radical artistic and activist origins. Galàs uses her art in service of trauma. By contrast, Milton Babbitt’s one-woman opera Philomel (1963) uses trauma in service of art, reviving the ancient myth for the birth of live electro-acoustic composition. Philomel’s mutilated voice and eventual transcendence are poignantly realized in the interplay between live soprano voice and a pre-recorded, electronically “shattered” soprano voice. Structural analysis, incorporating the piece’s serialism as well as its performative dimensions, reveals how Babbitt enacts the narrative on multiple levels. Thus we apply some of Haraway’s ideas to our understanding of how trauma shapes these pieces, performances, and performers.

Former Program Assistant at the Susan B. Anthony Institute for Gender and Women's Studies at the University of Rochester.
View all posts by Kaitlin Legg →
This entry was posted in Guest Blogger, SBAI Events and tagged #guestblogger, #music, #research. Bookmark the permalink.