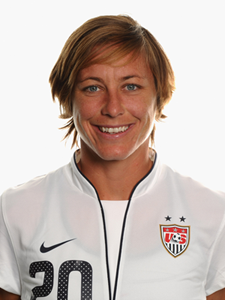 Abby Wambach, a Pittsford, NY native who rose to fame as a national and eventually international soccer star, is the first ever individual soccer player, male or female, to win the AP Athlete of the Year Award. According to the Democrat and Chronicle article, Wambach won the award with an overwhelming 65 out of 214 votes, beating the second highest finalist by almost 30 votes.

Earlier this year Wambach was awarded the title of Sportswoman of the Year for team sports by the Women’s Sports Foundation, and she is a finalist for the FIFA World Player of the Year honors.  She has been hailed as an ideal role model, especially for young girls, because of her hard work, dedication, and team-focused approach. Her team wins, including a clutch play against Brazil during the last seconds of their World Cup match last summer, impressed and inspired people around the world and have brought attention back to women’s soccer that hasn’t been seen since the era of Mia Hamm.

According to Wambach’s official website, she started playing youth soccer at age four and “was transferred to the boys’ team after scoring 27 goals in three games.” She scored her 100th goal in Rochester, NY in 2009, and is the ninth female player to ever reach 100 career international goals.  Besides playing soccer, Wambach is a spokesperson for the Generation Go program, which focuses on empowering and educating children to make healthy decisions. Wambach has been training for the Olympic Women’s Qualifying tournaments this January, and we look forward to seeing more big wins!

Former Program Assistant at the Susan B. Anthony Institute for Gender and Women's Studies at the University of Rochester.
View all posts by Kaitlin Legg →
This entry was posted in Uncategorized and tagged #Abby Wambach, #United States, #women's sports. Bookmark the permalink.