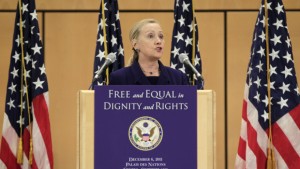 In what is being called a historic speech on LGBT rights, Secretary of State Hillary Clinton announced Tuesday that the United States would commit to protecting the human rights of LGBT people around the world through diplomacy and $3 million in aid to the newly launched Global Equality Fund. In support of this vow, President Obama also announced Tuesday that aid agencies must take into consideration the way countries treat their LGBT population when allocating foreign aid. President Obama’s initiatives to advance LGBT rights were also released this week. Clinton’s speech, titled “Free and Equal in Dignity and Rights,” is what Time Magazine describes as “a welcome surprise to those disappointed by the Obama administration’s decidedly mixed record on gay rights.”

via “Free and Equal in Dignity and Rights”:

Today, I want to talk about the work we have left to do to protect one group of people whose human rights are still denied in too many parts of the world today. In many ways, they are an invisible minority. They are arrested, beaten, terrorized, even executed. Many are treated with contempt and violence by their fellow citizens while authorities empowered to protect them look the other way or, too often, even join in the abuse. They are denied opportunities to work and learn, driven from their homes and countries, and forced to suppress or deny who they are to protect themselves from harm.

I am talking about gay, lesbian, bisexual, and transgender people, human beings born free and given bestowed equality and dignity, who have a right to claim that, which is now one of the remaining human rights challenges of our time. I speak about this subject knowing that my own country’s record on human rights for gay people is far from perfect. Until 2003, it was still a crime in parts of our country. Many LGBT Americans have endured violence and harassment in their own lives, and for some, including many young people, bullying and exclusion are daily experiences. So we, like all nations, have more work to do to protect human rights at home…

…When we see denials and abuses of human rights and fail to act, that sends the message to those deniers and abusers that they won’t suffer any consequences for their actions, and so they carry on. But when we do act, we send a powerful moral message.

Throughout the speech Clinton honestly and thoughtfully acknowledged the obstacles at hand and expressed her respect and understanding. “Legal protections have preceded, not followed, broader recognition of rights,” said Clinton. “Laws have a teaching effect. “ Clinton contextualized the task at hand both historically and on a global social scale, and outlined an approach that at its core reflects her own words: “Gay rights are human rights, and human rights are gay rights.”

Along with announcing the important human rights initiative, Clinton’s speech also honored this year’s Human Rights Day, which will be Saturday December 10th. The day marks the 63rd anniversary of the Universal Declaration of Human Rights. You can make your own Human Rights Day wish here and visit the United States Government’s Human Rights website to learn more about global initiatives.

How is the best way to start making change? Clinton offers a good piece of wisdom:

“Eleanor Roosevelt, who did so much to advance human rights worldwide, said that these rights begin in the small places close to home – the streets where people live, the schools they attend, the factories, farms, and offices where they work. These places are your domain. The actions you take, the ideals that you advocate, can determine whether human rights flourish where you are.”

Former Program Assistant at the Susan B. Anthony Institute for Gender and Women's Studies at the University of Rochester.
View all posts by Kaitlin Legg →
This entry was posted in Announcements and tagged #comingout, #government, #human rights, #Human Rights Day, #LGBT. Bookmark the permalink.