More Than a Blog Post: Looking Back Over Four Years of Women’s Studies

This is a guest post from Erika Howard. Erika graduates this weekend with a major in English and a minor in Women’s Studies. She began working at the SBAI office in 2011 and has been blogging here since! We will miss her very much (and hope that she’ll blog for us after she’s gone)! 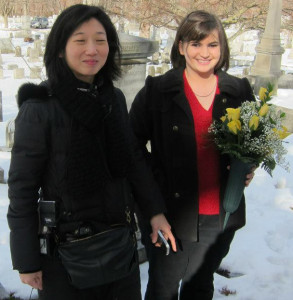 As a graduating senior, I can look back at my four years and think of a lot of things I’d like to change. Maybe I shouldn’t have dated that guy. Maybe I could have lived without that haircut. And Polish? Why did I think I wanted to learn Polish? But when I think of my time at SBAI, there’s not a thing I’d like to change. Oh, there were assignments I hated, events I could have missed, things that bored me, things that aggravated me, and in general numerous times I went home and my poor roommate was treated to a litany of “what went wrong” and “ughhhh I’m so frustrated.” But I wouldn’t have missed any of it. Because even the things that weren’t amazing (but trust me, there were many great days where my roommate heard “I love my Department” or “guess how ahhh-mazing my job was today,” so don’t feel too bad for her), I generally got to spend them learning things that really interested me, with people who I genuinely found and find to be remarkable human beings.

SBAI’s classes are wonderful—they’re undeniably interesting, generally cover really great material, and the professors are engaging and enthusiastic. There’s not a single class in this department I’ve taken where I haven’t absolutely loved what I was learning (at least overall—that’s not to say there weren’t sections where my frustrations won out). They tell me that in 10 years I won’t remember what I learned, or what books I read in class—I have to say, I hope that’s not true, because what I learned is awesome and I spent a lot of time learning it (not to mention that UR is crazy expensive and that seems like a waste if I’m going to forget it all). But if it is true, and I’ll just remember the people and experiences, at least I can rest assured that the people I’ve met and the experiences I’ve had through SBAI have been incredible, and helped me turn from a “interested in Feminism” freshman to “hell yes I’m a Feminist, want to discuss the issues of heteronormativity in pop culture?” senior. Some people may not love this development, and I have to say I occasionally miss being able to watch TV without dissecting it, but overall I’m still exceedingly pleased with the change.

And that’s exactly why SBAI and women’s studies departments in general are way more important than anyone gives them credit for—the issues you learn about are directly related to the real world. And not the real world of academia or a career, but your life, and what’s affecting you as you walk down the street and go to class and get a piece of pizza. Issues like rape culture, the media’s portrayal of women, and the virtual exclusion of awesomely badass women from history (aka pretty much every suffragette ever) affect us all constantly, and being aware of it is incredibly important. Anything that’s helped me learn to recognize these issues is something that I wouldn’t want to change, and that’s pretty much every single day I’ve spent with SBAI.

So in my four years, I’ve done research. I’ve made speeches (some better than others). I’ve done projects and gone on trips and met people who blew small-town, high school me’s mind clean out of the water. And virtually none of it would have been possible without this amazing department giving me tools and opportunities.

I’m a Teach for America corps member, and next year I’ll be teaching in Cleveland. I’m really excited about the program, and I’m thrilled (and only slightly terrified) to be a part of it. But I don’t think I would be on this path if it wasn’t for SBAI, so I owe them a lot—more than I can say in a blog post. And when I think of what I’m going to miss about UR (and there’s definitely a lot), SBAI definitely tops the list.

Former Program Assistant at the Susan B. Anthony Institute for Gender and Women's Studies at the University of Rochester.
View all posts by Kaitlin Legg →
This entry was posted in Guest Blogger and tagged #erika, #graduation, #guest, #guestblog, #guestblogger, #howard, #senior. Bookmark the permalink.