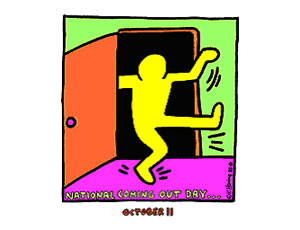 National Coming Out Day happens every year on October 11 to celebrate coming out, living openly, and being visible as an LGBTQ person or ally. It is also a day to call attention to local, national, and global LGBTQ issues. According to the Human Right’s Campaign (HRC), the annual holiday is also the anniversary of the 1987 March on Washington for Lesbian and Gay Rights. HRC is a useful resource for information on the holiday as well as advocacy, being out in the workplace, how to be a straight ally, and more.

In related news, The Chronicle of Higher Education recently published an article by S. Alan Ray, President of Elmhurst College, discussing LGBTQ issues on college campuses. The article, “Despite the Controversy, We’re Glad We Asked,” can be read in full at The Chronicle for Higher Education. Ray shares Elmhurst’s experience becoming the first college to ask prospective students: “Would you consider yourself a member of the LGBT (lesbian, gay, bisexual, transgender) community?” The question propelled the college into the national media spotlight, with both positive and negative press on radio shows, news-media websites, newspapers and television.

In the article, Ray discusses how Elmhurst’s decision to ask the question reinforces the college’s commitment to diversity and provides opportunities for underrepresented students to be supported. He also comments at length on the initial motivation behind asking the question, and how Elmhurst dealt with the onslaught of national attention and responses.

Former Program Assistant at the Susan B. Anthony Institute for Gender and Women's Studies at the University of Rochester.
View all posts by Kaitlin Legg →
This entry was posted in Announcements, Community and tagged #comingout, #LGBTQI, #rainbowlecture. Bookmark the permalink.