The Role is Simple: Hold. The. Purse.

This guest blog post comes from Hilary Wermers. Hilary writes today about her current experience as an intern in the Rochester office of New York State Congresswoman Louise Slaughter. Hilary is a double major in Women’s Studies and English and also works at the Susan B. Anthony Center for Women’s Leadership.

Last week, I got the chance to attend the Rochester/Monroe County Domestic Violence Consortium’s annual breakfast as part of my role as Congresswoman Louise Slaughter’s District Office intern. Now, let me be real for a second and say, this is rather the dream internship. Congresswoman Slaughter (aka LMS or The Boss, as she is referred to at the DO (District Office, more lingo!)) is a badass feminist; simply basking in her glow acts as a feminist revitalization. I am honored to be working for her, helping her in whatever small ways I can (mail sorting, yay!) to promote gender equality on Capitol Hill.

I was seriously satisfied by my simple intern duties. But when Katie LaShomb, the Congresswoman’s District Office educational and women’s issues arm, reached out to me and asked me to attend and help with The Boss’ brief press conference after the event, I couldn’t believe my luck. Katie’s desire to involve me in my interests echoed the Congresswoman’s first words to me; as I thanked her for the honor of working for her upon meeting, she said, “I hope you have the most fun you’ve ever had in your life, and I sure hope you learn a lot.” My role is not simply to sort the mail but to gain a deeper understanding of government and women’s role in it. I can imagine no better woman to observe than Congresswoman Slaughter. 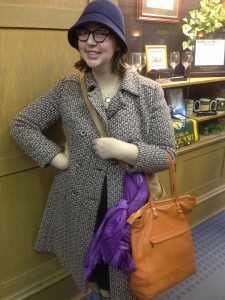 Hilary and THE PURSE.

Back to the Consortium’s breakfast. It took place on Friday, March 1. In case anyone has already forgotten, the Violence Against Women Act passed midday Thursday, February 28. This annual gathering served its usual function of promoting awareness of the issues of domestic violence and educating attendees about legislation pertaining to domestic violence, and it also celebrated the passing of this important piece of legislation.

I reveled in the hope, sadness, and desire for change that pervaded the breakfast, until I got that fateful text: “1 min away.” I jumped out of my seat, knocked my chair over, attempted to play it cool, and ran outside to meet The Boss and Katie. The Boss delivered the closing remarks at the breakfast; she arrived about two thirds of the way through. My role was simple: hold. the. purse.

There is something pretty magical about holding the purse of one of the original authors of VAWA as she addresses a crowd that is deeply invested in ending violence against women about that very legislation. She expressed gratitude to that crowd. She told them she could not imagine standing up in front of them had VAWA not passed. She emphasized the importance of protecting all women: “every time we’ve renewed the law, our goal has been the same: to ensure that all victims of domestic violence—no matter their ethnicity, their sexual orientation, their age or their gender—are acknowledged, helped, and protected by the law.”

After a standing ovation, The Boss cheerfully addressed each of the adoring constituents who were gasping for her attention. I held her purse and basked in the glow. Maybe I am starting to sound like a fangirl, and maybe I am. But I am learning from The Boss how to transform thought into political action, how to stand my ground, and how an empowered woman can change the world.

Former Program Assistant at the Susan B. Anthony Institute for Gender and Women's Studies at the University of Rochester.
View all posts by Kaitlin Legg →
This entry was posted in Guest Blogger and tagged #congress, #governement, #guestblog, #guestblogger, #louiseslaughter, #VAWA. Bookmark the permalink.