This blog post come from guest writer Erika Howard. Erika has served as an office assistant at SBAI for over a year. She will be graduating this spring with a major in English and a minor in gender and women’s studies. She has been a writer for the Campus Times, UR’s undergraduate newspaper. Erika is president of the Undergraduate Council for Gender and Women’s Studies and leads UR’s chapter of VOX:Voices for Planned Parenthood (a subcommittee of Women’s Caucus). 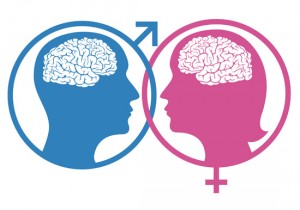 Finally, there is scientific proof that those “men are from Mars, women are from Venus” arguments are exactly what they seem to be—idiotic and not founded in fact. And the best part is, this exciting proof comes from Bobbi Carothers, who completed the study as part of her doctoral dissertation right here at UR, and Harry Reis, UR professor of psychology. In a Science Daily article entitled “Men are from Mars Earth, Women are from Venus Earth,” Carothers stated that “Sex is not nearly as confining a category as stereotypes and even some academic studies would have us believe.” Hooray!

The authors reached their conclusion by reanalyzing data from 13 studies that had shown significant sex differences, as well as collecting their own data on a range of psychological indicators and revisiting surveys on relationship interdependence, intimacy, and sexuality. They also reopened studies looking at the “big five” personality traits (extroversion, openness, agreeableness, emotional stability, and conscientiousness), and even ventured into topics considered “highly charged,” like femininity and masculinity. They then searched for evidence of attributes that could reliably categorize a person as male or female.

It turns out that there are physical differences between men and women (gasp!) and that gender can be used as predictors for hobbies (the Science Daily article lists scrapbooking and cosmetics for women and boxing and watching porn for men—I’m just going to sidestep right around that problematic minefield), but that when it came to the vast majority of psychological traits, including but not limited to fear of success, mate selection criteria, and empathy, men and women proved quite similar. Instead of scores clustering at the end of either spectrum (as they do for the physical differences), psychological indicators fall along a linear gradation for both genders, and in almost all cases the overlap between the genders was so extensive that the authors conclude it would be inaccurate to sort men and women according to personality types and psychological indicators.

“Thus, contrary to the assertions of pop psychology titles like Men Are From Mars, Women Are From Venus, it is untrue that men and women think about their relationships in qualitatively different ways,” the authors write. “Even leading researchers in gender and stereotyping can fall into the same trap.”

The authors also not that just because someone falls into one category, such as aggressive, it doesn’t necessarily follow that they also fall into other categories traditionally associated with the masculine side of things, like being good at math.

The best evidence we have that the so-called Mars/Venus gender divide is not the true source of problems within relationships, says Reis, is that “gay and lesbian couples have much the same problems relating to each other that heterosexual couples do. Clearly, it’s not so much sex, but human character that causes difficulties.”

Now this might seem like old hat to some of us who realized early on that liking to knit and being a passive person didn’t necessarily exclude us from also rocking in contact sports and acing math exams, but the fact of the matter is that scientifically speaking, until now it’s been the norm to simply conclude that men and women are inherently different based on gender, not personality. For changing the scientific perspective on this (and backing it up with data), everyone everywhere who doesn’t quite fit gender norms should give a big shout out to UR’s own Carothers and Reis—it might be a sad day for self-help books, but it’s a great day for gender equality!

Former Program Assistant at the Susan B. Anthony Institute for Gender and Women's Studies at the University of Rochester.
View all posts by Kaitlin Legg →
This entry was posted in News and tagged #development, #gender, #men, #menarefrommars, #psychology, #women, #womenarefromvenus. Bookmark the permalink.