Ahead of Time screening tomorrow

Tomorrow at 7:30pm in the Gowen Room of Wilson Commons, we will be screening Ahead of Time, the story of Ruth Gruber. This is the fourth installment of our Herstory: Inspiration in Film Women’s History Month Film Series.

Via Ruth Gruber The Movie: 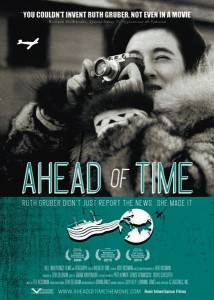 AHEAD OF TIME, the directorial debut of award-winning cinematographer Bob Richman (An Inconvenient Truth, The September Issue, My Architect) tells the remarkable journey of American writer and journalist Ruth Gruber.  Gruber, born in Brooklyn in 1911, was the youngest person in the world to receive a PhD at the age of 20, a feminist before feminism.  While at school in Cologne, she witnessed the rise of Nazism and began documenting her observations.  A trail-blazer who rejected the gender standards of her generation, she became a full-time journalist at the age of 24, traveling to the Soviet Arctic in 1935 as the first reporter in the region and beginning an illustrious career with the New York Herald Tribune.

Next week we will be wrapping up Herstory with a screening of Orgasm Inc. on April 6th. As always, we will be providing soda and snacks and hope to see many of you there!

This entry was posted in SBAI Events and tagged #filmseries, #womenshistorymonth. Bookmark the permalink.