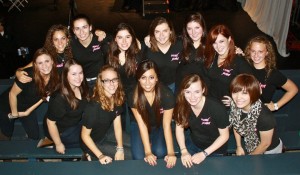 Vocal Point, the University of Rochester’s only all-female a cappella group, has been invited to the White House to perform! The group will showcase classic and contemporary holiday songs during a two-hour performance this Saturday morning.  Vocal Point will be performing in the White House while guests and visitors enjoy the annual Holiday Tour. Group members participated in an interview at WHEC TV earlier this week to discuss the exciting opportunity.

Vocal Point was founded in 1969 under the name Women’s Ensemble. The ensemble began as twelve women accompanied by piano. The group’s name change to “Vocal Point” in 1975, and by the 1980s the group had transitioned to exclusively a cappella performance.  The award winning group has competed in the International Competition of Collegiate A Cappella several times and recently won a Student Life Award from the University of Rochester for their co-sponsorship of “Rock Out for Leukemia Research: A Benefit Concert.”

Vocal Point holds auditions every fall. You can purchase their recent recording by emailing vocalpoint@gmail.com. Head over to the Vocal Point youtube page to  watch recent Vocal Point performances (including a must-see version of Fleetwood Mac’s “Rhiannon”)!

Next week, Vocal Point’s assistant musical director, Bailey Gripshover, will share details with SBAI blog readers about this once in a lifetime experience! Stay tuned.

Former Program Assistant at the Susan B. Anthony Institute for Gender and Women's Studies at the University of Rochester.
View all posts by Kaitlin Legg →
This entry was posted in News and tagged #allwomen, #music, #students, #whitehouse. Bookmark the permalink.