Where to From Here?: Transgender Day of Remembrance 2012 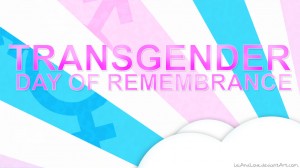 Today is the fourteenth annual International Transgender Day of Remembrance (TDoR). Even with the gains of LGBT individuals this year, there is a startling lack of protection and defense for the basic human rights of trans* individuals in America — or, as Vice President Joe Biden has said, transgender rights are “the civil rights issues of our time.” What can we do beyond memorializing our losses? How do we change a culture of fear to one of empowerment, love, and safety? TDoR is a day to honor trans* and gender non-conforming individuals who lost their lives simply because they were trying to live them; it is a time to raise awareness about the social injustices experienced by trans* and gender non-conforming individuals; but, let’s not forget: it’s also a time to celebrate the joys of living openly.

There are many ways to commemorate the day while making a better future:

And, to close, some good news, via thinkprogress.org:

The Common Council of Syracuse also passed a resolution urging the New York State Legislature to pass the Gender Expression Non-Discrimination Act (GENDA). GENDA would extend similar protections on a state-wide level. In May 2012, GENDA was passed by the NYS Assembly for the fifth time, but again failed to pass in the New York State Senate. We hope that by TDoR 2013 we will see much progress

Former Program Assistant at the Susan B. Anthony Institute for Gender and Women's Studies at the University of Rochester.
View all posts by Kaitlin Legg →
This entry was posted in Community, National News, News and tagged #civilrights, #genda, #gendernonconforming, #LGBT, #tdor, #trans, #transgender. Bookmark the permalink.