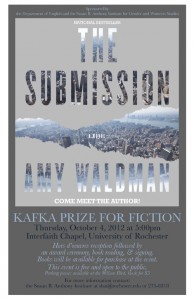 story-telling can create dialogue would be an oversimplification of the week’s mission. In fact, often times a fear of that dialogue — a fear of the difficult discussions that don’t always have a clear answer — is what causes book-banning and controversy to happen. Fiction has the potential to create space for the examination of social and cultural issues in a prismatic and multi-dimensional way. Sharing a story and experience, even if fictional, helps illuminated social and cultural issues. Books encourage individuals to think, and question, and thus help people heal and grow. Books give readers the chance to study the different sides of a complex issue, and revisit those issues as often as they wish.

Author Amy Waldman’s Kafka Prize winning post 9/11 novel, The Submission, at once shares with readers the potential for personal healing, dialogue, and growth, yet also describes that process as it plays out among characters in her story.

Via University of Rochester newsroom:

The Submission is set in Manhattan as a jury gathers to select plans for a memorial for the victims of the September 11th terrorist attack, only to learn that the anonymous architect who created the winning design is an American Muslim. Written in 2007, three years before the controversial Park51 proposal to locate an Islamic Centre near the World Trade Center site, Waldman says the idea for the novel came from a conversation with a friend. “We were talking about the 9/11 memorial competition and some of the intense reactions to architect Maya Lin’s winning designs for the Vietnam Veteran’s memorial, and I thought what would be the equivalent for the 9/11 competition?” said Waldman. “Once I had the idea of a Muslim American architect, I instantly wanted to know what would happen.”

SBAI is looking forward to this evening’s discussion with Waldman. We can’t wait to hear about her writing process and inspiration for her award-winning novel. See you tonight at 5pm in the Interfaith Chapel!

Former Program Assistant at the Susan B. Anthony Institute for Gender and Women's Studies at the University of Rochester.
View all posts by Kaitlin Legg →
This entry was posted in SBAI Events and tagged #bannedbooks, #KafkaPrize. Bookmark the permalink.