Kicking Off Banned Books Week With KaeLyn Rich, Director of the Genesee Valley Chapter of the NYCLU

This week is banned books week! For the rest of the week, we’ll be posting on topics relevant to this annual awareness-raising celebration for freedom of expression everywhere. KaeLyn Rich, Director of the Genesee Valley Chapter of the New York Civil Liberties Union, has generously allowed us to reprint her post from the Genesee Valley NYCLU Facebook Page. Read on to hear what KaeLyn’s favorite banned books are, and comment here with yours! 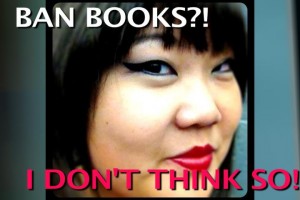 KaeLyn Rich, guest blogger and advocate for freedom of expression!

I love to read. I love to write. I love freedom of expression. I don’t believe the government should decide what I listen to, read, or watch. I do believe in upholding the First Amendment, even if I find an act of speech offensive or disagreeable. So of course I love banned books!

Each year the American Library Association compiles a list of the most challenged books in the U.S. and participates in Banned Books Week, a national celebration of freedom of expression by book lovers everywhere.

1. James and the Giant Peach by Roald Dahl
Magical inhabitable peaches. Glow-in-the-dark crocodile tongues. Anthropomorphic insects. The Empire State Building. So much to love from one of my favorite young adult authors. Unfortunately, this book is still on the American Library Associations 100 most challenged books list.

2. The Handmaid’s Tale by Margaret Atwood
Atwood is my favorite fiction author and possibly the most established female author in the science fiction genre (along with my other fav, Madeleine L’Engle, R.I.P). As legislators become increasingly more extreme in their plot to deny access to abortion and birth control, I find myself wondering if we are on the cusp of a real-life handmaid’s tale.

3. The Giver by Lois Lowry
This is one of the few books I have actually read over and over. Bless Lois Lowry’s sweet heart for writing wonderful dystopic fiction for young adults. This book was the gateway book for my next stop on the sci-fi/dystopia train…

4. Slaughterhouse-Five by Kurt Vonnegut
How I still love Billy Pilgrim, that lovely, terrible time-traveling soldier, who blew my 16-year-old mind with assertions that free will does not exist and everything is at once trivial and exceptional. I also love that Vonnegut donated 150 copies of this book to Republic High School students in 2011 after their school banned the book.

5. Are You There God? It’s Me, Margaret by Judy Blume
I thank Judy Blume for coaching me through my first questions about puberty, those weird stomach feelings when talking to someone cute, and the social deathmatch of girl culture. Blume was doing girl power before it was cool. “We must, we must, we must increase our bust!”

6. The Jungle by Upton Sinclair
An oldie, but a goodie, The Jungle has been challenged and banned over and over for it’s unprecedented and harsh depiction of the corruption of the American meatpacking industry during the early 1900’s. It was burned in Nazi bonfires and banned in East Germany for “promoting communism.” As recently as 1985, it was banned in my birth country, South Korea.

8. The Color Purple by Alice Walker
If Stephen Spielberg wants to make your book a movie and Oprah Winfrey wants to star in it and then Harvey Weinstein jumps in to make a Broadway musical adaptation, it’s probably a pretty darn good book. Required reading in some high schools, this frequently challenged book is far better than the screen and stage adaptations. Walker’s work explores oppression, gender norms, and the deep relationships between women.

9. The Hunger Games Trilogy by Suzanne Collins
Say hello to the 3rd most challenged book in 2011. Woot woot! What are the top reasons cited against the Hunger Games trilogy? “Anti-ethnic, anti-family, insensitivity, offensive language, occult/satanic, violence.” I see where the violence and language issues come from, but someone please show me where “occult/satanic” and “anti-family” issues comes into play?

10. Brave New World by Aldous Huxley
Huxley’s classic dystopic novel is creepy as heck, especially since his ominous premonitions about reproductive technology and sleep-learning have actually come to pass. Yikes! It is also still topping the charts, making the American Library Association’s Top 10 List of Most Challenged Books as recently as 2010 and 2011. “O brave new world, that has such people in’t.”

Former Program Assistant at the Susan B. Anthony Institute for Gender and Women's Studies at the University of Rochester.
View all posts by Kaitlin Legg →
This entry was posted in Guest Blogger and tagged #aclu, #bannedbookweek, #censorship, #guestblogger, #nyclu. Bookmark the permalink.

2 Responses to Kicking Off Banned Books Week With KaeLyn Rich, Director of the Genesee Valley Chapter of the NYCLU