Posted on April 6, 2018 by Susan B. Anthony Institute for Gender and Women's Studies University of Rochester

After my first gender studies course, I went through a sort of self-awakening about my gender, sexuality, race, class, and the variety of other identity factors that construct who we are and how we interact with the world and those around us. Although the University of Rochester offers a diverse and in-depth gender studies program, I decided to investigate a multitude of cultures to not only learn about my major, but to live it. 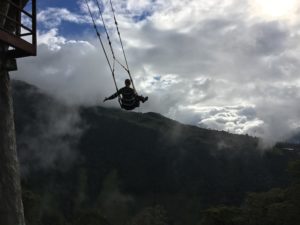 Studying in Quito was unique for a variety of reasons. Firstly, I needed a language requirement of at least 4 semesters of college level Spanish for my program as an IES Abroad student. Because of this language barrier, what seemed to be just a class on gender and society became a complex web of listening closely and contemplating how I construct my language. Language barrier aside, the most intriguing thing about living in another culture and studying gender studies was the opportunity to see studies in a real-world context. During my gender studies class, which centered around gender, sexuality, the patriarchal structure of Latin American society, religion, and the concept of Ecuadorian feminism, I was surprised to discover that a lot of progressive practices were built off the feminism movement in the United States. Although rereading bell hooks in Spanish was entertaining, what intrigued me the most was delving into the current feminist Ecuadorian movement. Ecuador and a large portion of South America struggle with femicides. That is, killing a woman purely because she is a woman. During my time in Quito, I witnessed and discussed a political rally that raised awareness of this phenomenon which created solidarity for those who had been affected, and for those wanting to end violence against women. 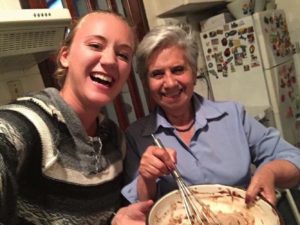 During my gender studies class we also delved into the term machismo. This is essentially the Latin American version of hypermasculinity. As machismo is a common occurrence that endures even today, I unfortunately got to experience my lectures in a real-world setting. As a blonde, white woman, my appearance was evidently foreign and drew much male attention and unsolicited comments. Throughout discussing my experiences with others, I learned that a lot of the attention I received was because of my intersection of race and gender, and other students of different ethnicities or genders didn’t receive the same treatment. In combination with real world experience and lectures, I’ve grown to self-analyze my identity and conflicting privileges and oppressions, and how the combination of my race, gender, sexuality, social class, etc. affected my surrounding, and vice versa.

In all, Ecuador offered me a chance to combat stereotypical views of South American culture with academic lectures and real-world experiences. I had the opportunity to challenge fellow classmates in their viewpoints, and to challenge myself to analyze and strengthen my opinions and beliefs concerning the variety of topics that genders studies encompasses. Although taking classes abroad was rewarding, the most insightful part of living in Ecuador was experiencing the culture, observing others behavior, and realizing that people and cultures oftentimes do not align perfectly with your textbook.

This spring semester I am studying abroad in Amsterdam, Netherlands. Before I left, I idealistically thought of Amsterdam as a liberal and essentially perfect city. Now that I’ve been through my first few weeks of classes and have delved into some of the realities of the city, I’ve found a variety of miscalculations within the utopia I previously assumed. 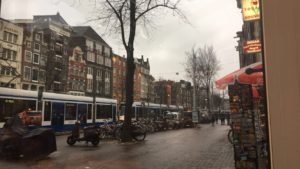 From my personal experiences as a queer woman, I’ve discovered that differing sexualities and genders are accepted, but the community for LGBTQ+ individuals in Amsterdam is more hidden. Since LGBTQ+ rights have been established since the early 2000s, many who identify as LGBTQ+ are integrated into the community, and don’t feel the need to publicly fight for their rights. I’ve met many people from the LGBTQ+ community that embrace this sense of normalcy. But after delving into readings and lectures from my favorite class (Intersectionality and the politics of difference) I’ve realized that this concept of “normal” is based off the heteronormative, white, cisgender, and privileged, sense of the word. I plan to further explore this notion of acceptance of sexuality and gender fluidity and the concept of wanting to fit into the cultural and often heteronormative construct of a “normal life” in my gender studies classes concerning intersectionality and the politics of difference, and gender studies in the context of Amsterdam.

Another interesting expression of sexuality resides in the red light district, where prostitution is legal and regulated. I’m aware most people view the concept of prostitution on opposite scales, as either oppressive or liberating. Yet I think these contrasting perceptions are based off illegal prostitution, which is unregulated and oftentimes dangerous. Later this semester I will tour the district with a former sex worker later in the semester and am thrilled at the opportunity to acquire knowledge and insight via hearing real world experiences instead of just reading a textbook. 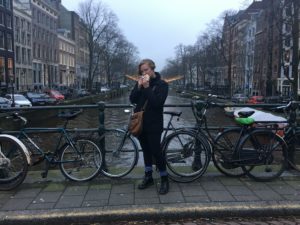 I’ve also noticed I feel safe here because I am white, female, and queer, and those are accepted forms of identity. The most important factor in this equation is my whiteness—as the stereotypical European citizen is white and I do not stick out as someone who is “different”. On the other hand, I imagine Turkish and Moroccan immigrants here experience discrimination and a sense of othering, as there is a strong anti-immigration mindset in the Netherlands especially with the abovementioned groups, correlated with racism and the fear that other cultures will tarnish the Netherlands sense of utopia. Although my classes are mostly composed of all white students, I’ve noticed a lot of us check each other on making comments that are problematic or discriminatory. Today we had a discussion in which our professor made a comment about the gaze of an African American woman in an advertisement, calling her gaze passive. One student corrected her on her bias, stating that she may view a white woman as “stoic.”

Although it’s sometimes disheartening to examine inequalities and to break Amsterdam from the pedestal of perfection that I once held it to, it’s an important factor in uncovering truth and moving towards equality. I’m eager to learn more and challenge my sense of feminism, intersectionality, and gender studies as a whole. Thus far, my classes seem to be full of other students with strengths in different areas of gender studies, and this exposure to differing viewpoints will challenge us all to grow while experiencing the topic within a differing cultural background.

Emily Radford is an undergraduate student from the University of Rochester majoring in Gender, Sexuality, and Women Studies and Psychology with a minor in Spanish. You can read more about Emily’s experiences abroad in a blog for The Institute of Education Sciences (IES) study abroad website and, Emily’s personal blog on issues of intersectionality abroad.

This entry was posted in SBAI Stories and tagged #genderstudies, SBAIundergrads, studyabroad. Bookmark the permalink.