Posted on March 20, 2017 by Susan B. Anthony Institute for Gender and Women's Studies University of Rochester

We are proud to co-sponsor the visit to Rochester of filmmaker Lizzie Borden as part of our Women’s History Month celebrations. 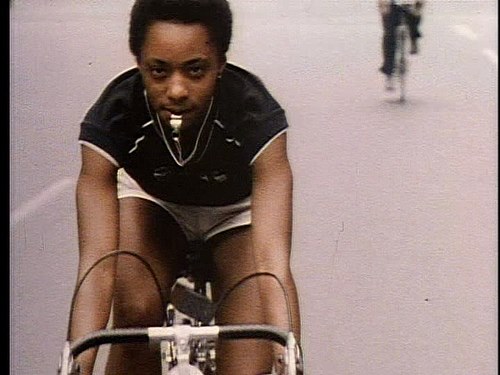 Her visit will include both a screening of BORN IN FLAMES (1983) at The Little Theatre and an artist talk at University of Rochester Humanities Center.

BORN IN FLAMES (1983) will be screened at The Little Theatre on Sunday, March 26th at 6:00pm as the closing film of our Women’s History Month Film Series 2017.

Lizzie Borden’s legendary feminist science-fiction film will be sreened in 35mm with a gorgeous recently preserved print by Anthology Film Archives with restoration funding from the Hollywood Foreign Press Association and The Film Foundation.

This 1983 documentary-style feminist science fiction film by Lizzie Borden that explores racism, classism, sexism and heterosexism in an alternative United States socialist democracy. The plot concerns two feminist groups in New York City, each voicing their concerns to the public by pirate radio. One group, led by an outspoken white lesbian, Isabel (Adele Bertei), operates “Radio Ragazza”. The other group, led by a soft-spoken African-American, Honey (Honey), operates “Phoenix Radio.” The local community is stimulated into action after a world-traveling political activist, Adelaide Norris (Jean Satterfield), is arrested upon arriving at a New York City airport, and suspiciously dies while in police custody.

This screening is presented with community partners ImageOut andWAYO 104.3 FM. It will be inrtoduced by Barbara LeSavoy, Director of Gender and Women’s Studies at the College of Brockport and a discussion will follow the screening with with:

Tickets will be $5 for the general public and FREE for students with ID, available at the box office and thelittle.org.

The series is sponsored by Humanities New York Action Grant and is co-presented by The Little Theatre, WXXI, and the Susan B. Anthony Institute for Gender, Sexuality, and Women’s Studies.