For the first time in 20 years, a woman will moderate the general election presidential debates 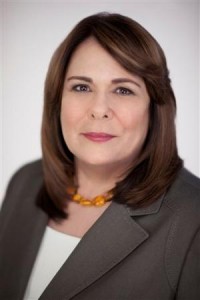 . The Commission on Presidential Debates announced yesterday that Candy Crowley, chief political correspondent for CNN, will host the second debate between President Barack Obama and Mitt Romney on October 16.

According to the CNN announcement, the last woman to moderate a presidential debate was Carole Simpson. Barbara Walters preceded Simpson, hosting debates in 1976 and 1984.

Another woman, ABC’s Martha Raddatz, will moderate the vice-presidential debate this year. James Rainey of the LA Times suggests that  “…even more heartening about both selections is that it puts two veteran journalists, best know for their work in the field, rather than an anchor’s chair, into the moderator’s seat.”

Crowley has interviewed top newsmakers, including Secretary of State Hillary Clinton, Former President George W. Bush, and Rep. Ron Paul. In 2009, she won the Gracie Allen Award for her coverage of Hillary Clinton’s presidential campaign. She is also the recipient of the Edward R. Murrow award and the Joan Shorenstein Barone Award for excellence in journalism. Her long list of honors includes an Emmy Award and an Associated Press Broadcasters’ Award.

Crowley is currently the anchor of CNN’s “State of the Union ,” where she brings newsmakers and analysts together to deliver information and opinions about major topics in policy and politics on a national and global stage. “State of the Union” airs on CNN every Sunday at 9 a.m. and noon.

Former Program Assistant at the Susan B. Anthony Institute for Gender and Women's Studies at the University of Rochester.
View all posts by Kaitlin Legg →
This entry was posted in National News, News and tagged #candycrowley, #CNN, #presidentialdebate, #womeninnews. Bookmark the permalink.