We have another exciting publication to announce! Congratulations to Susan E. Gustafson, Karl F. and Bertha A. Fuchs Professor of German Studies, for the recent publication of her book Goethe’s Families of the Heart (Bloomsbury, 2016). The book highlights Goethe’s “acceptance and promotion of all relationships formed through spontaneous affinities and love (including heterosexual, same-sex, nonexclusive, group, parental, and adoptive).” (via Bloomsbury).

Gustafson acted as Director of the Susan B. Anthony Institute from 2002-2007, is a long-time Associate of SBAI, and presented in-progress portions of this book at one of our Faculty Research Seminars in 2013. If you are interested in becoming a faculty affiliate or associate with SBAI, email sbai@rochester.edu. 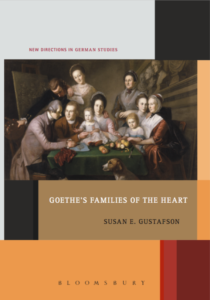 “Throughout his literary work Goethe portrays characters who defy and reject 18th and 19th century ideals of aristocratic and civil families, notions of heritage, assumptions about biological connections, expectations about heterosexuality, and legal mandates concerning marriage. The questions Goethe’s plays and novels pose are often modern and challenging: Do social conventions, family expectations, and legal mandates matter? Can two men or two women pair together and be parents? How many partners or parents should there be? Two? One? A group? Can parents love children not biologically related to them? Do biological parents always love their children? What is the nature of adoptive parents, children, and families? Ultimately, what is the fundamental essence of love and family?

Gustafson demonstrates that Goethe’s conception of the elective affinities is certainly not limited to heterosexual spouses or occasionally to men desiring men. A close analysis of Goethe’s explication of affinities throughout his literary production reveals his rejection of loveless relationships (for example, arranged marriages) and his acceptance and promotion of all relationships formed through spontaneous affinities and love (including heterosexual, same-sex, nonexclusive, group, parental, and adoptive).” (via Bloomsbury) 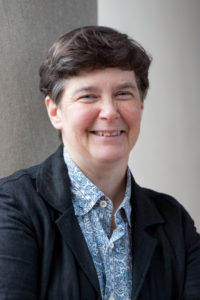 Susan Gustafson is a professor of German in the Modern Languages and Cultures Department at the University of Rochester. She has a doctorate in German from Stanford University, was a Charles Taft Postdoctoral Fellow at the University of Cincinnati, and an Alexander von Humboldt Fellow. Her first book is an analysis of the significance of the exclusion of mothers in Lessing’s dramas entitled: “Absent Mothers and Orphaned Fathers: Narcissism and Abjection in Lessing’s Aesthetic and Dramatic Production” (Wayne State, 1995). Her second book, “Men Desiring Men: The Poetry of Same-Sex Identity and Desire in German Classicism,” (Wayne State, 2002) focuses on how men developed a language to express their love for one other in letters and literary works in German Classicism. This book was awarded the 2004 GSA/DAAD Award for the Outstanding book on German Literature. She also has published numerous articles on German literature from the 18th to 20th centuries. Her current book project, “Families of the Heart: Bisexual, Same-Sex, and Adoptive Affinities in Goethe’s Literary Works” outlines how Goethe consistently challenges 18th and 19th century notions of love, heterosexuality, and family.

If you’re interested in finding additional information about the book, read more here!